Pamela Anderson to rock the world at Paris Nude Revue 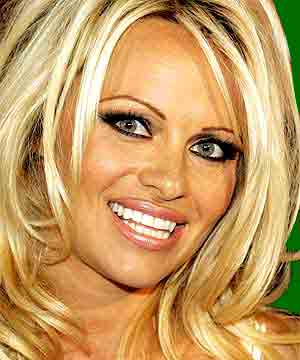 Pamela is going to perform four shows on 13 and 14th February 2008
Pamela Anderson is likely to perform nude around Valentine’s day, at Crazy Horse cabaret in Paris. This Former Baywatch star and Playboy model will dance on a special number. Pamela has always been famous for her bold performances but now she is married and settled. Still, in the media of entertainment she has been in the limelight because of her bold statements or performances. Based on Vedic Astrology principles, Ganesha would analyse how the show would go if she performs on that particular day. This astrological analysis is based on the details from the media, considering that show is going to happen on the given dates.

Pamela’s beauty from her birth chart

Ganesha notes that she is born with Taurus Ascendant. Taurus is sensual sign and ruled by Venus, it also signifies beauty. Ascendant Lord Venus is placed in the 4th house with Uranus and Pluto. In a horoscope, 4th house indicates chest/breasts and no wonder she has Venus the Ascendant Lord in the 4th house in Leo (a royal sign) with two large planets Pluto and Uranus. This is what makes that part of the body very large, royal or beautiful. However, as Uranus and Pluto are involved which are new-found planets and indicate technology and related matters too, her breasts are implanted artificially.

Her Moon is with Rahu. Moon signifies mind and Rahu is unconventional plus unpredictable. She is moody and very much unconventional. Moreover, her Mercury is retrograde in the second house with Sun so she can pass bold statements and may not regret for the same. In such case, she would hardly care of what others may think. Mercury is the Lord of fifth house of performance and it is retrograde so she is a good performer with lot of unconventionality in her views about performance, by and large.

As per Ashtakvarga system she has 31 Auspicious Bindus in the 10th house of Karma, 30 Bindus in the 11th house of gains, 33 Bindus in the house of finances. In such case, she may get slightly lesser payment or remuneration for the hard work that she puts in but ultimately she manages to earn good wealth, as the house of finance has more Bindus than the house of Karma. Ganesha would also like to underline that she is married to a person who used to play in a Las Vagas casino and whenever Pam used to lose money, she used to offer sex to that gambler. She has only 23 Auspicious Bindus in the fifth house of speculation. No wonder she would have hardly won in gambling but of course she won his heart and now they are happily married.

Though relocational Astrology is not practised in Vedic Astrology, Ganesha uses it effectively in many readings. Any horoscope relocated to a different place carries different planetary influences. Ganesha explains about Pam’s relocated chart to Paris.

Ascendant rising in the relocated chart is second house of Natal chart. Second house rules finances. Moreover as per Sarvashtakvarga in Paris, Pamela has 30 Bindus in the Karma Bhuvan but 38 Bindus in the 11th house of gains. Moon in the 10th house with Saturn indicates chances of delay in the beginning of the event but this cannot be analysed solely from the relocational horoscope. She will be appreciated by audience because seventh house Lord Jupiter is exalted in the second house that rules eyes! Would people watch her with ‘big eyeballs?’ Mars in the 4th house of relocated chart in opposition to Moon indicates the amount of tension at this show. She might require tight security at Paris, warns Ganesha.

As she is not going to live there all her life, Ganesha has not explained strength of other houses in her relocated Sarvashtakvarga. However, one thing is sure that she is going to get very good money out of her performance at Paris because house of gains has 8 more Bindus than in Karma Bhuvan. Ganesha also notes that fifth house Lord Venus of this related chart will be in the third house of ‘Parakrama’ in Leo sign. No wonder that she will be a ‘dare devil’ on the stage of performance at Paris and will not be afraid of anything. Neptune is also in the fifth house. Therefore, she will be able to perform very well. However, Ketu’s position in the fifth house is not very desirable here. Moreover, Ascendant falls in a dual sign Gemini. Both the factors indicate that there can be some delay in the performance or some hurdle during the show. However, Pam will get a lot of media coverage and success out of this show, states Ganesha.

Planetary transits on and around the days of performances

On the night of 13th February 2008, transiting Moon will be in the Void of Course in Aries. As per rule, this indicates cancellation of programme or delays and hurdles. In Pam’s chart, Aries falls in the 12th house from the Ascendant where her Natal Moon is placed with Rahu. Her Lunar Return is happening on 12th February 2008 early morning, with Stellium in Capricorn Ascendant. So, she can expect lot of hard work for the show. She will definitely put in all efforts to perform exceptionally well in this show. She will also have to be mentally prepared to do this, as it is going to be a challenging performance for her. Still, as on the second day 14th February 2008, transiting Moon is going to be in Taurus which is her Ascendant, Ganesha feels that she will go great guns on the second day of performance. On the first day, it will be more like ‘Grand Rehearsal’ for her, although no one would know what she thinks but second day’s performance will surely overshadow first day’s show. She may feel tired and washed out after the show, as transiting Moon will be in Square with transiting Saturn later. People may expect quite a bit from her and to some extent she may also compromise. But because transiting Mars- the seventh house Lord of her Natal chart will be passing through Gemini, her second house where Sun and Mercury are posited, she may also feel irritated or bogged down by some demands from audience, if such demands reach to her in loud voices. She is undoubtedly going to excite her watchers.

In short, Pam’s Nude Revue performance may thrill the mass. People watching her live at the location or on the television may not even wish to blink their eyes for a second. She will drive everyone crazy with her performance.