Made in China Vs Saand ki Aankh, which one would steal the show? - GaneshaSpeaks
https://www.ganeshaspeaks.com

Made in China Vs Saand ki Aankh, which one would steal the show? 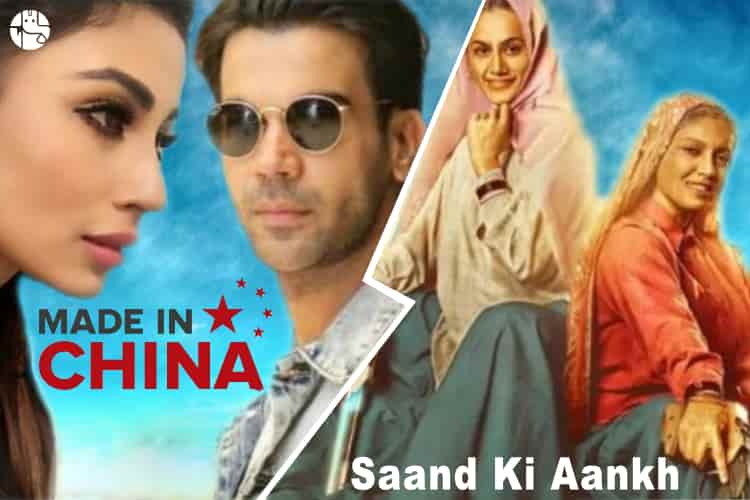 The Rajkummar Rao and Mouni Roy starrer Made in China is going to clash the box office this Diwali with the Taapsee Pannu and Bhumi Pednekar starrer Saand ki Aankh. The two Bollywood movies have already made a strong presence with their trailers on the internet. When people are eagerly waiting to fill the theatres for these movies, Ganesha has come up with the movie success prediction for box office clash between the two.

About the movie – Made in China

Made In China is a movie directed by The National Award winner for his Gujarati movie – Wrong Side Raju, Mikhil Musale. It is set to be released on October 25, 2019. The movie is produced by Dinesh Vijan under Maddock Films banner. Besides the talented Rajkummar Rao and Mouni Roy, this movie also boasts of worthy supporting actors like Boman Irani and Paresh Rawal. The movie revolves around a Gujarati middle-aged businessman played by Rajkummar Rao who, in the desire to be a successful entrepreneur, goes to China. The movie then unfolds into a comical and unusual drama which gives Rao a product to turn his failures into success. The movie is shot in Ahmedabad and China.

About the movie – Saand ki Aankh

Another movie to be released on October 25, 2019, Saand Ki Aankh translated as Bull’s Eye is based on a true story of two sharpshooter women of India. This Tushar Hiranandani directed movie is produced by Anurag Kashyap, Reliance Entertainment and Nidhi Parmar. Bhumi Pednekar, Taapsee Pannu and Prakash Jha play the main leads. The movie throws light into the lives of two sharpshooters Chandro Tomar and Prakashi Tomar, both above the age of 60. Saand Ki Aankh portrays how women from remote villages in India can break the stereotypes of age and profession and make their mark in a sport like sharpshooting. The journey of these two in the movie would set a strong example of inspiration and courage for other women of India.

Which one among the two will fare well? Let’s check the success prediction of Made in China and Saand Ki Aankh that will be clashing at the box office this Diwali.

Get your detailed personalized report for the year 2020 and know how the upcoming year looks for you!

Made in China Vs Saand Ki Aankh

According to the release time chart, the lord of the ninth house of fortune, Moon is placed in the tenth house of business which is a better sign for both the movies. However, if we compare the success ratio of Made in China and Saand ki Aankh, then it is necessary to compare the things in a different way.

We have analyzed the movies by numerology. According to that, the total of the movie Made in China is 8 which is ruled by Saturn. Saturn represents discipline, game-changer, slow but steady progress maker.

On the other hand, the total of the movie Saand Ki Aankh is 4 which is ruled by Rahu. Rahu is a shadow planet that represents darkness, secretiveness, and uncertainty.

The above influences are indicating that the movie Made in China may make better business as compared to Saand ki Aankh. In other words, Made in China may be commercially hit in India. Probably, it will also reach closer to 100 Crore club. Whereas Saand ki Aankh may not do well on the Box office and thus may fail to be a commercially successful film. It may do average in some states of India.

As far as leading cast performance is concerned, Rajkummar Rao is the leading role actor in Made In China. The total of his name is 2 which is ruled by Moon. And the leading actress is Mouni Roy. The total of her name is 6 which is ruled by Venus. The above influence indicates that lead characters will deliver their best performances and will be highly appreciated in this film. This film will give a chance to Rajkummar Rao to show his versatility. Audience and critics both will praise the performances. Other actors in the lead role will receive moderate or mixed acknowledgment.

On the contrary, Saand ki Aankh has two famous actresses, Taapsee Pannu and Bhumi Pednekar. The total of Taapsee Pannu is 7, which is ruled by Ketu and the total of Bhumi Pednekar is 5, which is ruled by Mercury. This factor shows uncertainties regarding the performance of the lead cast. Although their performances will be excellent, it may probably get unnoticed. Even, critics and other film evaluation firms may show lesser interest to appraise them.

The movie Made in China’s fate in India seems satisfactory as far as box office collection is concerned. Chances of moving towards 100 Cr. club are also expected. Summarily, the film will turn out to be both a critical and commercial success at the box office.

On the other hand, Saand ki Aankh movie will make moderate earnings through various means. This film is likely to attract a mixed audience as we may not be able to discriminate them among the mainstream.

Ganesha wishes good luck and a bright future to all the movie casts, directors and producers.

To Get Your Personalized Solutions, Talk to Your Astrologers Now!