Madhuri Dixit- the Queen of Hearts

Madhuri Dixit- the Queen of Hearts 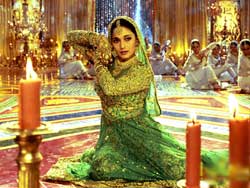 Madhuri Dixit- the Ek do teen girl made her debut in Abodh (1984). She continued to rule the silver screen for many years giving hit films like Tezaab, Ram Lakhan, Beta, Khalnayak, Pukar and the most recent Devdas. She got married to Sriram Nene in 1999 and got settled in USA. Ganesha focuses here on her career and especially on her comeback in Bollywood with Yash Chopra's "Aaja Nachle". She was born to Mr. Shankar & Mrs. Snehlata Dixit on May 15, 1967 in Ratnagiri. Madhuri dixit, a great actress of Bollywood industry was a top-line model before entering this industry. Her first Hindi movie was 'Abodh', a released and forgotten movie. Then Madhuri's God father Subhas Ghai gave her the proper launch through the movie 'Ram Lakan'. But she became very famous after her performance in ' Tezaab ' and `Dil'. She remained on the top of Bollywood for more than a decade. Dance Diva Madhuri Dixit will be back to enthrall the audiences on the silver screen after a gap of five years.Madhuri Dixit plays the role of a theatre actress in Aaja Nachle currently in production under the banner of Yash Raj Films. The film is expected to hit the cinema halls on 30th November.18th October has been finalized as the date on which music of this much awaited Madhuri Dixit's comeback film would be unveiled. Two songs from the film are already out for the promotion. While title song 'Aaja Nachle' by Sunidhi Chauhan is already blazing on all music channels. After having a look on her birth chart of Scorpio ascendance with Scorpio Navamansh, Ganesha feels that transiting Jupiter is passing through 1st house. She will find luck, ease of working and general good fortune. It indicates positions of high standing. She is under the influence of Venus-Venus-Mars Mahadasha period where relationship of Venus with Mars is a good indicator in Panchadha Maitri. But after 10-11-2007, she will be completing Mars Prati Antar Dasha period and entering into Rahu Prati Antar Dasha period. Rahu is posited in her 7th house while Venus is in conjunction with Moon and Saturn. Ganesha observes that Madhuri should worship her Deity to avoid malefic effect of Venus-Venus-Rahu dasha period because these two planets are bitter enemies in relationship. On the other hand, Jupiter will be transiting from 10th house counting from Moon after 22nd November 2007. This position of Jupiter denotes a steady rise in life bringing honours, favours from superiors as well as she will get good support of public also. Lord of Ascendance is passing over Natal Jupiter; she shall have better planning to build financial strength. Hence, Ganesha feels that, she may accept some more offers of big banners in films.Ganesha wishes Madhuri for progress and development in her second innings. May she continue to be Rani as she was before marriage!Ganesha's Grace,Malav A. BhattThe Ganeshaspeaks Team
Share