How loudly will the box-office cash registers ring with Kaanchi – The Unbreakable? Finds out Ganesha 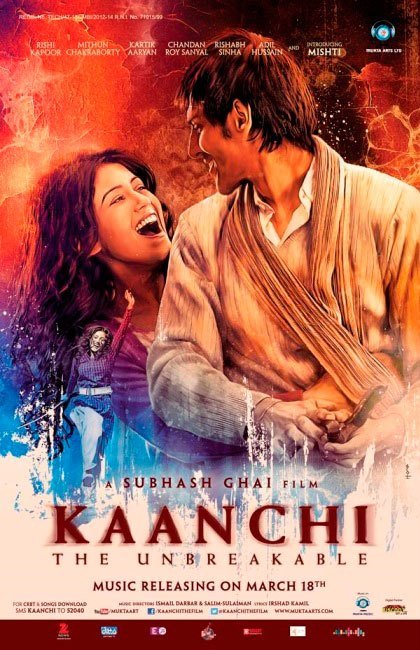 Ace director Subhash Ghai is back! After a long break of six years, he will be showcasing his skills as a director one more time with Kaanchi – The Unbreakable, starring a new actress Mishti Chakraborty and Pyaar ka Panchnama fame Kartik Tiwari. Subhash Ghai, in his usual style, changed the Bengali model’s name from Indrani to Mishti for his film. Veteran actors Mithun Chakraborty and Rishi Kapoor are also playing important roles in this film, who’s story revolves around the character named Kaanchi, a girl of modern times, and her fight against injustice. Known for working very closely with his music directors, Subhash Ghai has roped in Ismail Darbar and music director duo Salim-Sulaiman to compose the soundtrack of this film.

The last few films by Subhash Ghai failed to meet audiences’ expectations. Will Kaanchi – The Unbreakable be a much required re-beginning for him? Will Mishti Chakraborty manage to impress the audiences? The year 2014 has not been very exciting for Bollywood, as far as the business is concerned. Will Kaanchi be able to make a difference? Ganesha analyses the Release Time Chart of Kaanchi – The Unbreakable, and finds out what the stars foretell.

Summarily, Ganesha finds that Subhash Ghai’s latest – Kaanchi – The Unbreakable shall do better than average business at box-office. But, it may not turn out to be a blockbuster.