Shy and reserved in his personal life, actor Ajay Devgan transforms into a completely different person once the camera starts rolling. He has proved, and repeatedly so, that he is a class act and amazingly versatile when it comes to acting, irrespective of the role he is playing.

Although his initial claim to fame was as a love-lorn action hero, his more memorable roles are the ones in romantic dramas like, Hum Dil De Chuke Sanam and Pyar Toh Hona Hi Tha. He has tried his hands, successfully, in Romantic-comedies like Ishq and Golmaal, and serious cult flicks like Zakhm and the Legend of Bhagat Singh. His mesmerising performance in the latter two earned him the National Film Award for best actor.

The success of his latest film Atithi Tum Kab Jaoge has proved that besides the three Khans, devgan is the most bankable actor in Bollywood. With the actor turning 41 recently, Ganesha uses Vedic astrology system to assess his fate in the coming year. 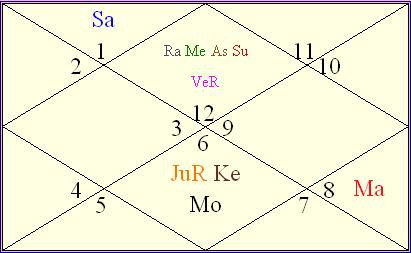 On the whole, the year ahead is going to be progressive for Ajay devgan. Ganesha wishes him good luck.