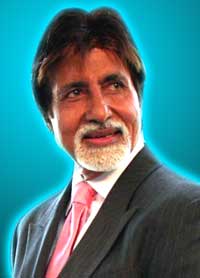 Amitabh Bachchan is a living legend and a prominent figure in Hindi Film industry. He has received many awards in his career spanning over 38 years. He has explored various genres of film making from singer to producer to television presenter. He was also elected as member of Indian Parliament from 1984-1987. His family is considered as the first family of Bollywood. He is blessed with two children- daughter Shweta and Actor son Abhishek Bachchan. He has become the father-in-law of world’s most beautiful woman Aishwarya Rai this year. Ganesha finds his personality interesting enough to predict his future.

Mr. Amitabh Bachchan was born on 11th October 1942 with Aquarius Ascendant. Lord of the Ascendant i.e. Saturn is retrograde and is placed in 4th house (house of pleasure). Lord of the Ascendant i.e. Saturn is aspecting Ascendant by his 10th aspect and is aspecting 10th house (house of career) by his 7th aspect. Ketu is placed in Ascendant. As a result of such planetary position, Amitabh Bachchan’s personality has become famous in India as well as in the whole world. Best known as an actor, Bachchan has been awarded with major awards in his career, including three National Film Awards and twelve Filmfare Awards. He holds the record for most number of Best Actor nominations at the Filmfare.

Ganesha feels that Major period of Saturn and sub period of Mars, which is lord of the 10th house of government, was ruling during 1984. During this period, Amitabh Bachchan contested Allahabad’s Parliament seat against H. N. Bahuguna, a well-known politician, and won his MP candidacy by the highest victory margin ever for a parliamentary candidate in Indian history (68.2% of the vote),

In Amitabh Bachchan’s horoscope, lord of the 10th house (house of business) i.e. Mars has become weak due to placement in 8th house, he had to incur losses in ABCL company, as Mercury (significator of finance and business) is occupying its own sign in Virgo.

Looking at the horoscope of Amitabh Bachchan, conjunction of lord of the 10th house (house of career) i.e. Mars and Mercury (significator of communication and speech) are placed in 8th house and are aspecting 2nd house (house of wealth and finance), he was offered the role of anchor in KBC ( Kaun Banega Karodpati). During this period, Major period of Mercury and sub period of Jupiter was ruling.

Ganesha feels that during Major period of Mercury, sub period of Saturn and sub-sub period of Sun, Amitabh Bachchan was admitted to Lilavati Hospital’s ICU once more, to undergo surgery for diverticulitis of the small intestine.

As per Vimshotari dasha system, currently Amitabh Bachchan is passing through Major period of Ketu and Ketu is placed in Ascendant, so during this period, he has become more spiritual. Amitabh Bachchan has visited religious place like Lord Tirupati Balaji at Tirupati, Siddhivinayak temple at Bombay, Dwarka located close to Jamnagar in Gujarat during major period of Ketu.

Ganesha feels that transiting Saturn and transiting Ketu are passing through 7th house over Natal Rahu and transiting Mars is retrograde, which is the lord of the 10th house of government and career, due to this planetary position On June 2, 2007, a Faizabad court ruled that he had illegally acquired agricultural land designated specifically for landless Dalit farmers. Ganesha feels that period between January 2008 and April 2008 would not be favourable as far as government related matters are concerned.

Amitabh Bachchan has been passing through Major period of Ketu after 6th November 2007. During this period, he may face some government, partnership and renewal of contract related problems. However, transiting Jupiter is passing through 11th house (house of gain), which indicates that for career point of view 2008 and 2009 would be very much favourable. Ganesha feels that he may get some good news from his children. He may get big films with famous directors, which will increase his name and fame in Bollywood as well as in Hollywood.

Amitabh Bachchan’s first English language film The Last Lear was premiered at the 2007 Toronto International Film Festival on September 9, 2007. He received positive reviews from critics who hailed his performance as his career best.