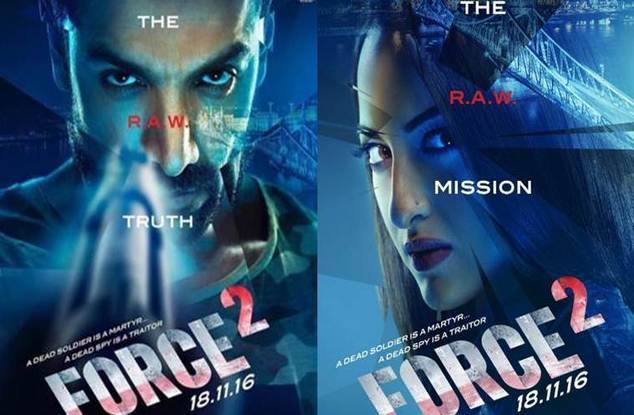 Force 2 – the movie which promises to be a high-octane action thriller, will be releasing on 18th November. This sequel to the 2011 hit will be starring Sonakshi Sinha opposite John Abraham. Talking of the movie’s overall prospects, Ganesha feels that it will do quite well despite the unfavourable circumstances (cash crunch), and will impress with its high-adrenaline action content. Find out what the stars indicate about the film in this exclusive forecast.

The Astro-basics: Understanding the planetary placements in the movie’s Release Time Chart

Ganesha notes that the John Abraham-Sonakshi Sinha starrer – Force 2 will release with Sagittarius Ascendant, wherein Venus is placed. The 2nd House of finances is occupied by an exalted Mars, while the Lord of the 2nd House – Saturn, is placed in the 12th House.

It is interesting to note that all the Kendra Houses are occupied by the benefics – Venus, Jupiter and the Moon. Moreover, the Sun and Saturn are both placed in the 6th House from the Moon.

What do the planets imply?

“There can’t be anything better than an exalted Mars in the Chart of a film which is centrally based on the action genre.”

– This astrological aspect of the film, is well explained in of the parts of song – Rang Laal.

Starting with great force?
Considering all the astrological aspects mentioned above, Ganesha feels that Force 2 will have a good start at the box office. Though all the theaters may not witness full houses, but major cinema houses will witness scores of people watching this film. Due to the favourable transit of the Moon during the first weekend, the film may enjoy a good three days of business.

Analysing the film’s prospects in the first week:
Ganesha feels that the positive effects of the planets will also reflect in the kind of business the film does on day 4. Day 5 and 6 will witness average performance. Day 7 onwards, the movie shall witness a lot of positive movement and more audiences may head to the cinema houses. The movie’s graph will get better in the 2nd week, but what about you? Will 2017 be a wonderful year for you? Find the answers with our personalised 2017 Overview Report.

“Sonakshi Sinha’s performance may prove to be a surprise package in this film.”

Exalted Mars – The perfect placement for an action film

Mars – which happens to be the Lord of the 5th House of performance, is placed in its Sign of exaltation, in the 2nd House. This placement, according to Ganesha, will work very strongly in the movie’s favour. Due to this, the action sequences of the film are likely to be very impressive and will score a lot of points with the audiences.

The performances:
Ganesha sounds quite optimistic about the overall performances of the film. The mutual aspect of Venus and the Moon, as well as the exaltation of the Lord of the 5th House indicates a good show by the starcast. John Abraham seems to be the big winner in this section, but Ganesha tells us to look forward to Sonakshi’s performance, as she may also pack a solid punch.

The business prospects:
Ganesha feels that this movie will do considerably good business. But, as the Lords of the 2nd House and 12th House are in exchange with each other, business prospects seem quite bright in the foreign territories.