Did Saif and Kareena walk the aisle? 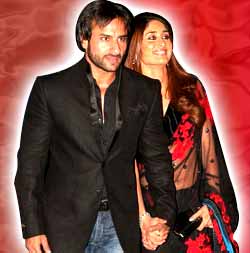 The hottest couple of Bollywood- Saif Ali Khan and Kareena Kapoor have always been in news after their association. Few days ago, some newspapers published Saif’s statement where he said that he has found a perfect soul mate in Kareena. Now, some news channels added fuel to the fire by telecasting news about their marriage. Speculations are rising to know what is the truth. As per the information published in the news paper, they’ve got married on Wednesday ie. 6th February 2008. What’s the truth? Do planets indicate their marriage? Ganesha would like to present a quick astrological reading on the subject.

Are planets indicating Saif Kareena’s Marriage?
For marriage, there should be some relation between couple’s Venus, Moon and Jupiter (being natural benefic planets). Ganesha observes that transiting Moon, Sun and Neptune were in the same sign as Saif and Kareena’s Moon. Mercury was retrograde in the same sign as Saif and Kareena’s Moon. Mercury is associated with communication, print media and written news. Its retrogression indicates the scope of goof ups in any type of communication, printing, news etc. On 7th of February 2008, there was Solar Eclipse in Capricorn as per Vedic Astrology System. This Eclipse was also falling on Saif and Kareena’s Moon. This Eclipse was not visible in India but Ganesha has doubts whether Eclipse is seen or not, because it happens in the Zodiac, it is going to leave some impact at least. Therefore, its effect cannot be denied completely. Coming back to the news printed in Mumbai Mirror, Ganesha feels that it may be a misleading news. However, the day was important for both of them, from astrological angle. From Astrological angle, the news seems fake and ‘unconfirmed’ as retrograde Mercury points towards the ‘miscommunication’ involved in the matter.

Eclipse in Magha Constellation and Saif-Kareena’s horoscopes
On 21st February 2008, Lunar Eclipse is going to take place in Magha Constellation at around 8 degrees of Leo as per Vedic Astrology System. Saif has Mercury and Ketu in Leo and Kareena has combust Jupiter in Leo, hence Ganesha again foresees this couple to be under the spotlight between 20th and 22nd February 2008.