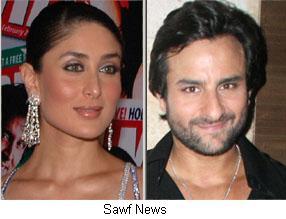 No matter if Shahid feels like a martyr and Saif feels like a Hero but Bebo is in limelight! As Ganesha had predicted before, Saif has opened his mouth about this relationship with Sun’s entry in Scorpio and has started talking about the relationship with bold and non committal statements like `I am committed!’ Bebo is not ready to open her heart in front of media, Alas!

Saif Ali Khan is born on 16th August 1970 and Kareena Kapoor is born on 21st September 1980.
Ganesha notes that Saif is a Leo and Kareena is a Virgo. Leos are often attention seeking being ruled by Sun and Virgos are highly practical as well calculative, being ruled by Mercury, so to say. Moreover, Saif being born on 16th August is under the influence of second Decanate of Leo, ruled by intense and energetic Mars. Bebo being born on 21st September is influenced by Venus!

Remember John Gray’s book `Men are from Mars, Women are from Venus’? After going much in depth, Ganesha thinks this is one reason why Bebo and Saif are attracted towards each other. Leo and Virgo, their signs are in 2:12 relationship and in such relationships, lovers are unable to understand each other’s style and expectations in love. In case of Leo and Virgo relationship, Ganesha feels that they will require lots of adjustments. Although it is not very unfriendly, it is neither a very amicable relationship.

Planets mentioned in this table are as per Sidereal Astrology (Vedic) System.

Ganesha observes that Bebo’s Venus falls on Saif’s Mars and Sun. This is a strong reason why they are attracted towards each other. As the sign indicated here is Cancer and this sign signifies home and domestic matters, they may be desiring deep intense love leading to establishment of `home sweet home’. On the other hand, Bebo’s strong Rahu falling on Saif’s Sun indicates that Saif will have to keep away from controversies and tensions. Saif may remain under stress while going around with her. Like Kareena’s Venus falls on Saif’s Sun, Saif’s Venus falls on Kareena’s Sun! Amazing, isn’t it? This in line with Jupiter Ketu combination in Leo found in this Synastry (Match), Ganesha feels that there is something Karmic between both of them.

Kareena’s Stellium of planets Sun, exalted Mercury, Pluto and Combust Saturn falling on Saif’s Pluto and debilitated Venus indicates that Kareena will have `reins in hand’ in this relationship although Saif is a Leo by Sun sign appearing to be leading in this relationship, by Sun sign! No wonder he would be guided by Kareena in many matters but under these circumstances, Ganesha also feels that if this relationship lasts long and gets converted into `divine conjugal bliss’, Saif may feel restricted by Bebo and may seek `freedom’. However, with debilitated Venus, although he denies his image as a womanizer, he may start looking for `freedom’ in case of love matters too!

Mars and Jupiter combination in Libra seems fine for both of them. It may also prove good for their careers, as the combination happens in Libra.

Although time of birth is not available, Ganesha has taken Moon into consideration which was in Capricorn for both of them at the time of Sunrise. This is again agreeable point provided Moon sign is different.

Considering all the points explained above, Ganesha feels that although there are many astrological reasons for both of them to get attracted towards each other. In this case, Kareena is the Driving force and with Rahu’s return in Saif’s chart, he has come across this Karmic sort of a relationship. Moreover, Saif is about to return Venus return. Therefore, 4th to 30th November 2007 – transit of Venus through Virgo is decisive phase for Saif and here he may get inspired to take some decisions in regard to the relationship.

In short, Ganesha finds this match to be average and not highly agreeable as per Sun Signs and Vedic Astrology System both but because Venus and Mars are strongly represented in the reading of the match, this is more like infatuation. Mars and Venus are so strongly represented in this `astrological duet’ that Ganesha is not surprised to read the news that a photographer caught the `Nawab Saab’s prodigy Saif’ and `Sexy Baby’s Sexy Sis Kareena Bebo’ smooching and hugging.

Ganesha wishes that this doesn’t prove to be a Tashan of `Bollywood Stars’.