Career Graph of Hrithik Roshan likely to go up in 2008 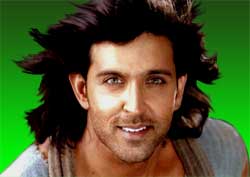 The Superstar of the millennium and the highest paid actor of Bollywood, Hrithik Roshan can be seen on the front page of every newspaper and magazine now due to his forthcoming film Jodha Akbar. He has proved his mettle time and again, as despite delivering some box office smashes in the initial stage of his career he never left hope. His determination took him to the height where he is standing today. Ganesha also has deep faith in his skills.

Hrithik was born on 10th January 1974 with rising Pisces ascendant. His Lord of ascendant is Jupiter which is situated in the 11th house of gain and desire fulfilment. Third Lord Venus, which is the significator of arts and acting, is retrograde in 11th house. This planetary position indicates that elders and also father and mother may bless him. The natural benefic planet Moon is in Cancer giving him natural luck for rising in life. This situation gives him best dancing ability and expertise. He is one of the best dancers in Bollywood without a shadow of a doubt. No other actor/actress comes close to him in dancing. He showed that he is the best dancer in his first film Kaho na pyar hain and so on. There are more, Jab Dil Mile, You Are My Sonia, It’s Magic, Idhar Chala, Main Aisa Kyon Hoon, Dil Na Diya, Dil Laga Na and Dhoom Again. Of course everyone knows that he is the powerful dancer.

Because Natal Jupiter and Moon are in square aspect and aspecting each other, he has a powerful Dhanyoga. This is called Gajkesry yoga, which will give him more wealth and fame. Currently, transiting Jupiter is passing over his Natal Sun, which denotes he will get many types of opportunities in Hollywood. Ganesha has visions that in 2008 he will enter Hollywood films. Over all, his future is bright in Hollywood as well as Bollywood. Sun is in fiery sign in Sagittarius. His Sun is very strong. Plus the Sun is placed in the tenth house, which is naturally favourable.

Moon is aspected by powerful Mars, which forms Rajyoga making his financial positions strong. All in all, his horoscope shows that he will get more success in the film Industry and his career would not be limited to acting only. He is likely to do some other activities related to film industry later. His career graph would show some extra shine between April and June 2008 while transiting Mars will be passing over the Natal Moon.