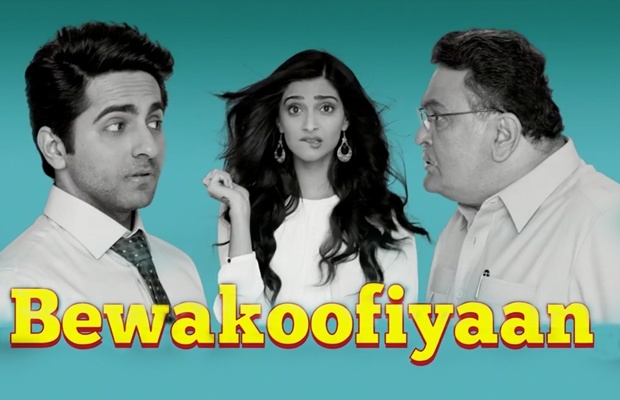 The crimes against women in India often go unnoticed and unreported, and many a times the issues are swept under the carpet. In such scenario rises few brave ladies who raise their voices against social injustice and discrimination. Gulab Gang, a film starring arch competitors during their heydays – Madhuri Dixit Nene and Juhi Chawla, promises to tell one such story. Based on real life incidents, Gulab Gang is a film about women who chose to rise against odds. Well, the stars suggest that the film will open on a good note, but it would be too much to expect it to break the opening-day collection records. Let’s see what else the release time chart of Gulab Gang indicates. The very talented Ayushmann ‘Vicky Donor’ Khurrana pairs up with the style diva Sonam Kapoor in Yash Raj banner’s, Aditya Chopra produced, soon-to-be-released Bewakoofiyan. The film is a romcom with Rishi Kapoor playing the spoil-sport father, creating hurdles for the much-in-love lead couple – who also, incidentally, in the film deals with the effects of global financial meltdown and recession. The film has caught the eye of audiences mostly owing to Sonam’s first bikini appearance – while it’s theatrical trailer was rather thrashed by the critics. Movies posters have an old world charm, though, and Ayushmann’s presence surely promises some more! What do the stars of the film – which releases on 14th March 2014 – also the beginning of the T-20 Cricket World Cup 2014 – say? Let’s ask Ganesha!

Ganesha took a peek in the future, checked Bewakoofiyan’s Release Time Chart to arrive at the following forecasts –

1. The film releases with Aries Ascendant (in the 1st House) and Venus in the 10th House, and three- retrograde planets placed in the 7th House – of the Release Time Chart.

2. Considering these planetary positions, Ganesha strongly feels that Bewakoofiyaan will get an average to below-average opening at the box-office. Also, the Moon’s position in Ketu’s Constellation Magha and Ketu’s placement in its own Nakshatra (in the Ascendant) is NOT a good sign for the film Bewakoofiyaan.

3. Ganesha, however, feels that the movie has a good chance of doing satisfactory business abroad. But, overall in India, it may not work that well.

4. A not-so-good opening, however, should not be mistaken for bad direction or not-so-good performances.

It is also noteworthy that the male lead Ayushmann has his birthday on 14th September, while the film is releasing on 14th March – exactly six months away from his birthday. This numerological aspect further makes Ganesha surmise that even Ayushmann’s performance will not help this film much.

All in all, Ganesha is of the opinion that the movie Bewakoofiyaan, irrespective of the performances and banner, won’t manage to collect much at the box-office.

Ganesha wishes luck to the cast and crew of Bewakoofiyaan.

If you wish to seek guidance on any important matter of your life, please avail Ask Any Question report at the earliest.