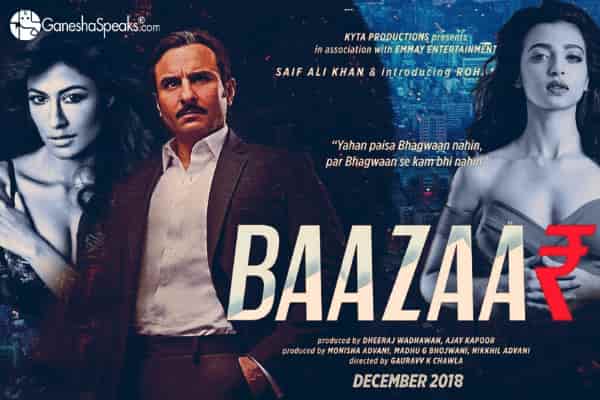 It has been a while since we've seen a Bollywood film that revolves around business, specifically the Stock Market. Director Gauravv K. Chawla and the writer/producer Nikkhil Advani are all set to release this upcoming crime drama film on the 26th of October, starring Saif Ali Khan as the antagonist, Chitrangada Singh, Radhika Apte and debutant Rohan Mehra who is the protagonist in this movie.

The official trailer for this movie was released at the end of September and had managed to catch the eyes of the audience with the intense drama portrayed in the film by Saif Ali Khan who plays an abominable Gujarati businessman! The film revolves around money, power, business and primarily revolves around the stock market which makes the film all the more interesting. Saif Ali Khan in one of his interviews shared his opinion on this role and how it is so powerful yet dramatic in its essence. Furthermore, he added that it was great fun playing a street-smart Gujarati businessman with a negative character with such an influence on the movie! Saif Ali Khan has beautifully evolved as an actor, and it shows in his performances. Not many actors have been lucky enough to make such a comeback and bag the kind of roles he has. We’ve loved and adored the Nawab in the movie Omkara where he also portrayed a negative character, and we hope he does justice to this character as well!

The Fate Of The Movie In The Bollywood Arena:

The Natal Sun rules the 10th house of business which is conjunct with Venus and Mercury in the 12th house. This shows that the movie will create a mass appeal in terms of its songs and music. As far as the entertainment aspect is concerned, this combination denotes the fortunate sign to receive better compliments and praises from film critics and other film evaluation authorities. Therefore the planetary situation suggests that the movie will do above average in India which is a good sign. To know more about your planetary situation Ask An Expert.

The movie will be released during the Scorpio Ascendant with the presence of Jupiter in the 1st house. Thus, the lead characters will be highly appreciated in this film with respect to their performance and execution of their acting abilities. Both the audience and the critics will definitely accept them.

The lord of the 10th house, Sun, is conjunct with Venus and is placed in the 12th house which shows that the movie will attain an above average success as far as financial gains are concerned. The film's overseas fate does not seem satisfactory or promising to Ganesha. But within the Indian territory, it may receive better reach in some states. The 11th house of horoscope also represents gains through other means. Hence, this film may earn some profit via other ways as well! So, we hope that the film does well to prove to the viewers that a commercial film may also have the capability to include some good drama, intense acting and a well-written script.

To get your personalized solutions! Talk To Astrologer Now.