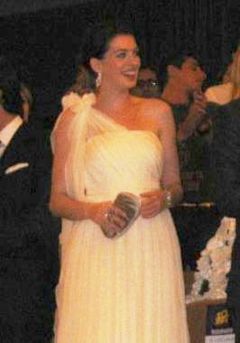 Anne Jacqueline Hathaway born in New York is an American film and stage actress. Hathaway made her acting debut in the 1999 television series Get Real, but her first prominent role was in Disney’s family comedy The Princess Diaries (2001), which established her career. She continued to appear in Disney films in the next three years, and she had the lead roles in Ella Enchanted and The Princess Diaries 2: Royal Engagement (both 2004). Hathaway took more creative control over her career in 2005 and co-starred in the adult-themed Havoc and Brokeback Mountain, both requiring extensive nude scenes

Ganesha feels that during April 2008, she may have betterment in state of fame and fortune. But, on the other hand she is under influence of Sadhe Sati of Saturn. However, after November 2007, benefic Jupiter will aspect transiting Saturn. However, she should offer some food to beggars near Temple every Saturday. With Jupiter in the Fourth House you will find luck, comfortable life, safe and financially secured family, loving partner and all other domestic matters. The Devil Wears Prada (2006), in which she starred opposite Meryl Streep. Transit of Jupiter from second house provided her a vast platform. That film has become the highest-grossing film of her career.

Ganesha wishes all the glory for her in the years to come.