Home Blog Business Satya Nadella Microsoft Path Ahead For Him 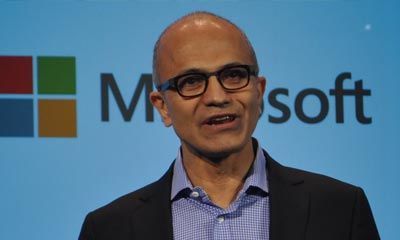 Satya Narayana Nadella, the Indian-American Business Executive amazed a lot of people all over the world and even became a big topic of discussion in 2014, when he became the first person of Indian origin to be crowned with the position of the CEO of the American Multi-Billion Dollar Organisation- Microsoft. It was an achievement, which all Indians will always be proud of and draw a lot of inspiration from. Nadella, a Telugu speaking Brahmin from Hyderabad, India was born on 19th August, 2015 to Bukkapuram Nadella Yugandher, who was a Civil Servant of the Indian Administrative Services and Prabhavati Yugandhar. Nadella did his schooling from  Hyderabad Public School, Begumpet. He then further obtained a Bachelor's degree in electrical engineering from the Manipal Institute of Technology and for a Master's degree in Computer Science, he travelled to the US. Later he received an MBA from the University of Chicago Booth School of Business. He married Anupama Nadella in 1992 and has three children with her. Ganesha, with the help of Astrology, takes a lot at his stars and predicts the path ahead for him. Let's take a look....
Satya Nadella
CEO of Microsoft
Date of birth :-  19th August , 1967
Birth Time :-     Not Known
Place of Birth :- Hyderabad, Andhra Pradesh ,India
Solar Chart

Please Note that the Celebrity's details are based on the Solar Horoscope (Surya Kundli )with the help of Birth date and place, as the  Birth time  is not available.
Astrological Observations:-
Astrological Predictions :-
How will this period be for him?
Thus, as a conclusion, Ganesha says that the year ahead will bear good fruits, but with a few hiccups for the Microsoft heavyweight.
Ganesha wishes a great time ahead to Satya Nadella and hopes that he scales greater heights.
With Ganesha's Grace,
Rantidev A. Upadhyay
The GaneshaSpeaks.com Team
Share