Mukesh Ambani Birthday Predictions For The Year Ahead The recent decision by the Modi-led government has given a major boost to the Indian economy. As everyone knows, Modi took a concrete decision of demonetization of 500 and 1000 rupee notes to get a better control on black money. After analyzing the financial prospects in India’s foundation chart as well as the sun chart of the latest rupee symbol, Ganesha believes that this is just the beginning. There are many more changes to come in the coming months. He also believes that the problem of counterfeit notes may appear once again in the year 2018, especially between January and July. Let us know in detail about this step taken by Shri Modi to bring change in the economy. 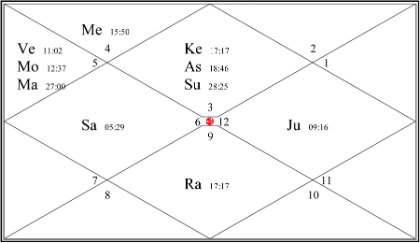 Get your birth certificate handwritten by our experts.

According to Ganeshji, the launch date of the new rupee symbol was not favorable. The falling value of Rupee is analyzed on the basis of Surya Kundli prepared on 15th July, 2010. The current symbol of Rupee was launched on this day.

In the Surya Kundli shown above, Gemini is the Ascendant whose lord Mercury is in the second house. Sun and Ketu are situated in the first house. Moon, the lord of finance and economy house in Magha Nakshatra, is situated in the third house, which is ruled by Ketu. Therefore, it is worth mentioning here that both the planets Sun and Moon are under the significant influence (negative form) of Ketu.

During the coming financial year, the above condition and effects as told by Ganesha will remain. If you are into stock trading and betting, then make good use of the guidance given by the experts and make your strategic decisions accordingly.

“Between the period of the last week of November and December, a major change in the position of the rupee is expected due to military activity”

Also read- Urjit Patel has proved to be a game changer for the Indian economy.

In the coming time, the rupee will be under the influence of the dasha sequence given below. In this sequence, we had predicted the first point a long time ago and now this prediction seems to be proving correct.

October 28, 2016 to November 26, 2016: Venus-Moon-Sun
“Government intervention in this period is likely to strengthen the rupee. The government can also achieve success in this endeavor. ,

November 27, 2016 to December 21, 2016: Fri-Tues-Tue
There may be some major ups and downs during this period due to Mars occupying the dominant position. The impact of some military operations or cross-border military activities can strongly affect the economy as well as the rupee.

Keeping in view the market scenario and the condition of the stocks, Ganeshji advises you to remain alert during this period. If you indulge in speculation and stock market trading, the influence of planets can force you to act hastily or aggressively. Because of this you can end up making mistakes. But would you like to go through those methods so that you can avoid taking wrong business decisions? So be sure to take advantage of our personalized report, Ask Business a Question.

December 21, 2016 to February 23, 2017: Venus-Mars-Rahu
According to Ganesha, three different influences will work in this phase. Stock traders will have to proceed with utmost care and caution at this stage, as volatility will be clearly visible and the overall trend will also be highly uncertain. Ganeshji says that at this time there will be a fog of confusion everywhere, due to which it will be very difficult to understand what will be the next step of the government?

“The serious threat of counterfeit currency may strike again in 2018”
Also read: In the first half of Vikram Samvat 2073, the stock market will…
What will happen next?
What does the position of the planets indicate about the fortunes of the rupee in the coming months?
According to Ganesha, Rahu will transit over the Moon, Venus and Mars are in the sun chart of the Indian national rupee and hence we cannot expect the position of the rupee to come into a stable system until at least August 18, 2017. Saturn will also transit in a path-retrograde-route motion. Especially when this mighty taskmaster is in Scorpio. There may be excessive income tax raids this time and the law enforcement authorities will take strict action in case of financial irregularities. Are you worried about your current financial situation and you are looking for good opportunities? Then our experts can help you.

Are there any other changes you see in the coming months? Is there any other big decision likely to be taken by the government?
Ganesha believes that there is no possibility of any major change in the position of the rupee in the coming months. But the year 2018 is likely to see some breaking news and a lot of headlines on TV screens regarding the rupee. There is a high probability of exchange of counterfeit notes between January 26, 2018, and July 10, 2018.

In the end Ganesha says that the coming
More about this source textSource text required for additional translation information
Send feedback
Side panels
History
Saved
Contribute
5,000 character limit. Use the arrows to translate more.

May will be very interesting and there will be a lot to see ahead at this time. The government is likely to do its best to stabilize the rupee by taking some necessary steps at critical moments. Besides, the Indo-Pak situation may also have an impact on the rupee position.

With the blessings of Ganeshji,
Dharmesh Joshi and Aditya Sai
Ganeshspeaks.com

Do you have some questions in your mind regarding different areas of life? So why be confused? Immediately Talk to the astrologer and clear all the confusions.