Lindsay Lohan, actress, model and singer-songwriter, began her career as a child fashion model and made her movie debut in Disney's 1998 remake of 'The Parent Trap' at the age of 11. The actress who always manages to attract significant publicity, particularly surrounding her personal life is a favourite of the paparazzi. But this time, the superstar is in news for all the wrong reasons, as she will be facing a lonely three months in prison for violating her parole on drunken-driving charges. She will be jailed at the Century Regional Detention Facility in Los Angeles -- and is expected to be kept separately from other inmates.
How will Lohan cope up with the jail life, where make-up is banned and inmates have to wear a uniform? As the Mean Girls actress prepares to begin her 90-day sentence on July 20, Ganesha, employing Vedic astrology, takes a look at her horoscope and tries to find out what is in store for her.Lindsay Lohan Surya Kundli 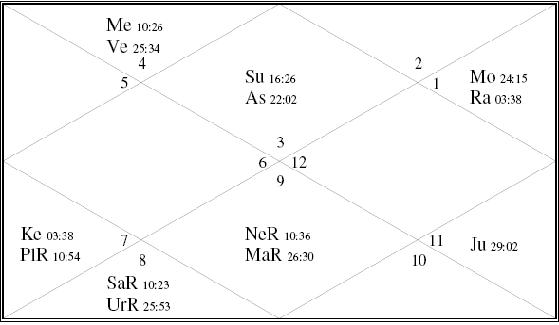 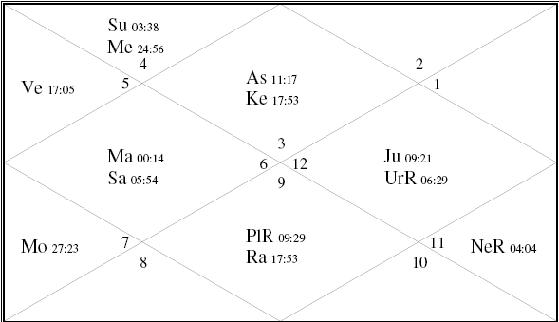 Astrological ExplanationLindsay was born with Sun in Ardra Constellation and Retrograde Pluto in Libra in Swati Constellation. Both Ardra and Swati are Rahu's Constellation. Currently Ketu is transiting through Ardra Constellation and it is approaching Lindsay's Natal Sun, observes Ganesha.Sun signifies dignity, glory and spirit. Those born with powerful Sun become famous and with a weak Sun, one can expect troubles to social/public image and defame. Pluto retrograde in Libra is intensified and often gives unconventional and makes the person extravagant. Those born with retrograde Pluto in Libra are often seen going out of the code of conduct, depending on their social environment. Retrograde Pluto in Libra can also indicate difficulties in getting justice through the court.What is leading Lindsay to 90 days jail?As Natal Sun and Pluto both are in Rahu's Constellation and as transiting Ketu is in Rahu's constellation i.e. Ardra, approaching Lindsay's Natal Sun, she came across such an awkward situation in life. News says that she violated her probation by failing to attend weekly alcohol education classes. Again, here Alcohol or any such addictive drugs that create Maaya or Illusions - are also represented by Rahu.Ganesha feels that transit of Ketu through Rahu's constellation affecting/activating Lindsay's Natal Sun the significator of dignity and retrograde Pluto - the planet of unconventionality and outrageous behaviour will help her learn certain values in life. The positive side here is, transiting Ketu's connection with Natal Sun can create Dhwaj Kirti Yoga, Lindsay has anyway remained in the limelight but that's not the point. Ketu also signifies spirituality. May this process lead her to spiritual path which will help her have an insight and if she sticks on to it, she may be a changed person.Once Ketu moves on from Rahu's Constellation, Lindsay should be out of the current matter, provided she follows rules and regulations.Good luck and may Lord Ganesha bless Lindsay Lohan with a bright future.Ganesha's Grace,Bhavesh N. PattniThe GaneshaSpeaks Team
Share