Why temples are closed during Surya Grahan and Chandra Grahan? 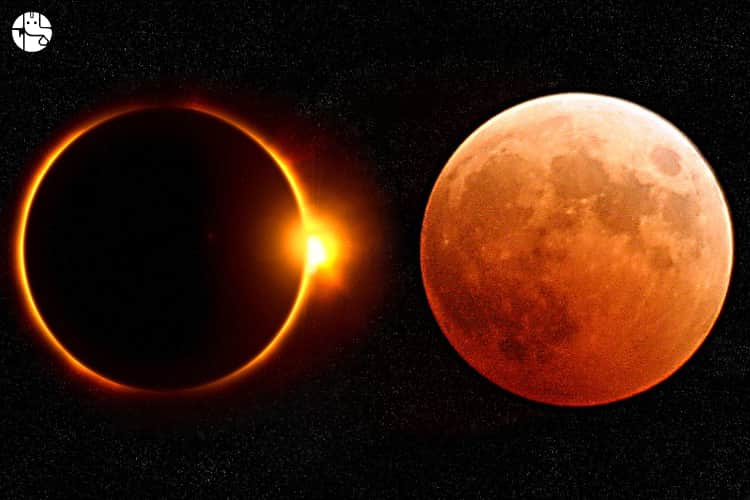 About Eclipse or Grahan

Eclipse can be Solar eclipse and Lunar eclipse also known as Surya Grahan and Chandra Grahan respectively, and it occurs due to the obscuring of astronomical rays on the path of rays either fully or partially because of the placement of the second object.

It is a rare event and a very spectacular sight, but it is visible only in a few areas. Many people find it is exciting, but according to the Hindu texts or scriptures, it is not an exciting thing for which one should wait.

Ask any questions to our expert astrologer regarding the effect of Surya Grahan and Chandra Grahan on your horoscope.

1. What does the lunar or solar eclipse mean in astrology?

The moon is aligned perfectly between the Sun and the Earth when the Moon is passing through North or South Lunar Nodes to create eclipse or Grahan.

2. Is it good to see a lunar eclipse (Chandra Grahan) or solar eclipse (Surya Grahan)?

According to the Myth the Sun gets swallow when the Sun and the Moon are at one of the North or South Lunar nodes. In an Indian Vedic Astrology the cycles of Rahu and Ketu in celestial fear is known to all but their relation to the eclipse or Grahan make the character of Rahu and Ketu mysterious, strange, frightening, dark and hidden.

So, it is not good to see a lunar eclipse (Chandra Grahan) or solar eclipse (Surya Grahan)

A temple is a place where one experiences deeper subjective tranquillity of pure awareness. It is a place where the divine aspect of life can be admired through deep observation. The geometry of places of spiritual healing is used as a Yantra which can create tenuous energy flow.

The idols inside the temple have been placed by performing all ceremonies and rituals, and they constantly emerge positive energy. Most of the individuals don’t visit the temple to experience subjective tranquillity within but to present their wish-list in front of God.

4. Why are temples closed during a lunar eclipse or solar eclipse?

Know more about the impact of Chandra Grahan on your Zodiac SIgn.

5. What happens inside the temple during the time of Grahan?

After closing the door, tulsi leaves are placed on the idols to cover them against the abnormal negative energy released during the time of Grahan.

6. Do all the holy places of Hindus are closed during the time of Grahan?

All the holy places are closed during the time of Grahan except the Kalahateshwar temple in Sri Kalahasthi (Kailash of South India). It is the only temple in India that offers puja and prayers to Rahu and Ketu. Hence the effect of Grahan is not there on this temple.

Get Rahu Ketu report and know the impact of Rahu and Ketu on you and also know the remedies to be done to overcome the malefic effect.