Know Why Do We Ring Bell In Temple 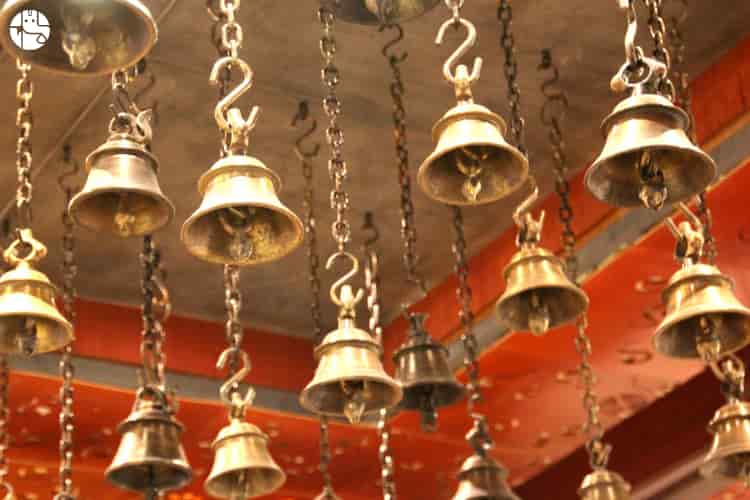 Most of us would have thought why do we see bells in all the Hindu temples and what will be the significance of bell to keep in all the temples. Let’s explore then …

Why bells are hung in temples, and why do we ring a bell in a temple?

It is believed that by ringing bells in a temple, Gods who reside in their idols wake up and wishes of devotees are fulfilled soon. A type of temple bell is also designed to produce the sound ‘Om’, a Hindu temple bell ringing sound that is believed to have the same frequency as the frequency of the earth’s rotation around its axis.

The temple bell is supposed to be rung before starting worship, because the temple bell sound effect is such that the divine enters you and all demonic forces within your soul depart, and so do the ones outside it.

According to the Skanda Purana through the temple bell ringing, the sins of humans’ hundred lives are removed. The temple where the sound of the bell is heard clearly, such temples are called Jagrat Dev.

The scientific reason behind the temple bell

Hanging bells in a temple not just spiritual, but also scientific reasons. Temple bells are crafted with several metals and alloys, and quantities of these metals are mixed with accurate scientific calculations. As a result, when you ring the bell, complete harmony is created between the left and right lobes of the brain, bringing you to a state of supreme calm.

It is also believed that when the bell is played, then there is a vibration in the atmosphere, which goes far enough due to the atmosphere. The advantage of this vibration is that all the bacteria, viruses and microorganisms that are coming in its area are destroyed so that the surrounding environment becomes purified.

Even while doing the ritualistic arati, we ring the bell. It is sometimes accompanied by the auspicious sounds of the conch and other musical instruments.

Also, read the significance of conch in the Hindu religion.

1. It prepares you for the prayer you are going to start, wakes you up and puts you in a state of awareness about prayer.
2. The environment created puts you in a state of trance that takes calmness and worship to another level.
3. Temple bells & Shankh sound effects the power of concentration in the brain to increase immensely and become strong.
4. The echo touches the seven chakras of the body, which completely relaxes your body.
5. Temple bell ringing removes negative forces and opens doors to prosperity.
6. By ringing the temple bell god is invited to accept the worship and prayers of the devotee, and also evil spirits do not come near you.

Buy gemstone to ward off evil spirits and negative influence of malefic planets.

There are four types of bells mentioned below:
1. Garuda bell– The Garuda bell is small, which can be played with one hand
2. Doorbell– It hangs at the door. It is both large and small.
3. Hand bell-It is around and a concrete plate of brass, which is played with a wooden instrument
4. Ghant– It is very big, at least 5 feet long and wide. After playing it, the sound goes for several kilometres.

The symbolic meaning of temple bells

Sure you might not have known that ringing the bell before prayer was this wondrous. So next time don’t forget to ring the temple bell with full force because it is believed that when you ring the bell, then your mind becomes empty from thoughts. And you enter in the state where you are more receptive and aware. This is the only way to awaken your mind and thoughts before you enter the temple.