Know Which Plants And Leaves Are Used During Dussehra 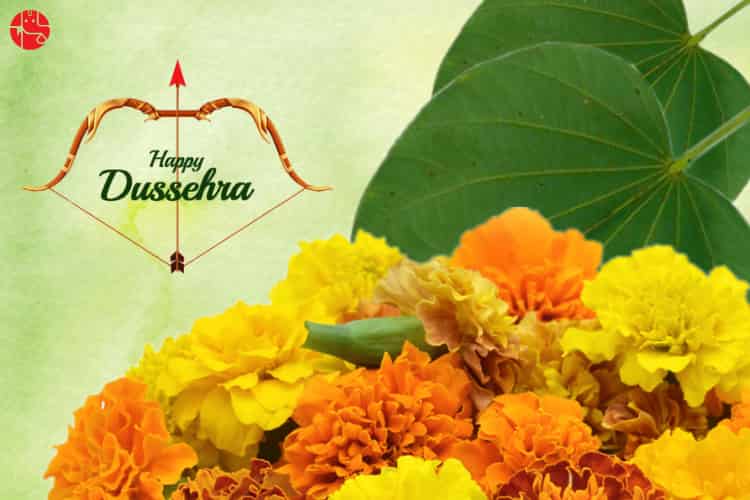 Indeed, the auspicious festival of Dussehra (also known as Vijayadashmi) is about the victory of good over evil. Thus, the festival commemorates the triumph of the righteous Lord Rama over the wicked demon king Ravana. It also marks the success of Goddess Durga against the wicked Mahishasur. Well, it is also said that real victory can happen only when we defeat our inner weaknesses. And to defeat our inner weaknesses, we need to take recourse to the divine and the supra-mundane.

One method to invoke all-round happiness is by drawing energy from our surroundings, most prominently green and live vegetation. Vegetation is life for humankind and festivals are meant to bring in more and more life fullness, thus there is bound to be a close and deep connection between the two. Hence, we have an invocation to the vegetation and various elements of nature in various religions in the world and more so in Hinduism. Perhaps, it is for this precise reason that people worship some trees (and their leaves) on the day of Dussehra.

There is a lot of importance of trees in Indian culture. Well, here we present you some information about sacred plants of India and leaves that are worshipped on the day of Dussehra. Read on to know about trees worshipped during Dussehra:

It is a native Indian tree easily recognised due to its typical rough-textured twin leaves. In Dussehra puja, Apta leaves are plucked, are considered as gold and looted from each other metaphorically as per the ritual in Maharashtra and some other states.

The significance of Apta tree lies in the following legend: it is said that the god of wealth Kubera converted millions of Apta leaves into gold on Dussehra and paid it as Guru Dakshina to an honourable scholar Kautsya.

This leguminous tree also is found in the Indian subcontinent. This tree thrives mostly in dry areas and holds medicinal values.

According to the Indian tradition, Pandavas had lost to the Kauravas in a dice game and had to stay in a forest in exile. When they entered the final year of their exile and before entering the kingdom of Virat, they had hidden their weapons in a Shami tree. After the completion of exile, they recovered their weapons from the tree on Vijayadashmi and went on to defeat the Kauravas. Since then Shami trees and weapons have been worshipped.

These saffron-coloured flowers are quite popular. They are useful in worship and making garlands for decoration. They are also used very commonly in Dussehra. The vehicles, shops and homes of people are decorated with garlands made up of Marigold.

The Marigold flowers are also known as ‘Herb of the Sun’. These flowers can change peoples’ moods and eliminate stress and anxiety. The orange and yellow colour of this flower is considered lucky and auspicious for starting something new and important in life.

Mango tree leaves are also very much used during Dussehra. They are used both in decoration and during puja rituals. Torans made from mango-tree leaves adorn the main doors of houses, temples and offices on Diwali. It is stated that mango leaves increase fertility. They are also known to possess antiseptic and antibacterial characteristics to eliminate illnesses.

The Asoka tree is also used during Dussehra, for decorations and in rituals. Ashoka is considered a very sacred tree in Hinduism. In the Indian tradition, in Indian epic poetry, there is a mention of Ashoka tree in the Ramayana about the Ashoka Vatika (garden of Ashoka trees) where Hanuman first meets Sita. It is also associated with Kamadeva, the Hindu god of love, who included an Ashoka blossom among the five flowers in his quiver, where Ashoka represent seductive hypnosis.