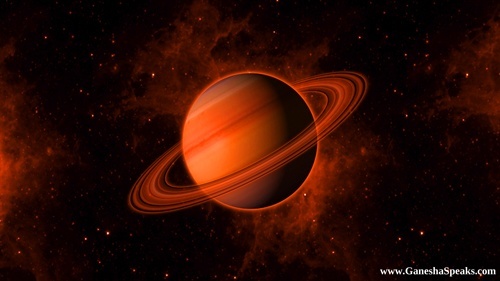 Scientists claim that they have witnessed the birth of a new moon in the rings of the mighty planet Saturn. Informally named Peggy, the object could become the 63rd moon in Saturn’s orbit. The evidence comes from an image of the outermost ring of Saturn captured by the spacecraft Cassini. Scientists noticed a bump or distortion on the edge of the ring, which they believe is caused by the formation of a new moon. However, the moon is so small (hardly half a mile in diameter) that it may be difficult for it to even survive. The question that, however, bothers the Astrologers is will this phenomenon have any impact on the way astrological calculations are done? Ganesha probes!

Saturn’s moons
Saturn has many moons around it, and Peggy is just going to be an addition to the list. Saturn is said to have about 62 moons (53 confirmed and 9 ‘provisional’). Some of their names are Dione, Rhea, Tethys, Hyperion, Janus, Pandora, etc.

Moons of other planets
All planets have their own moons, except Mercury and Venus. Earth has 1 moon, Mars has 2 (Deimos and Phobos), Jupiter has 67, Uranus has 27, Neptune has 14, and Pluto has 5.

Will Saturn’s newfound moon, named ‘Peggy’, have an impact on astrology?
No, it is not going to have any impact on astrological calculations that are being given at present. The reasons why these moons are not taken into consideration are:

In astrology, since the earliest times known to man, Babylonian and Indian saints and astronomers have included planets that are able to leave an impact on life on Earth. Of course, in those ancient times, there were no satellites or such powerful observatories which we now have, but the saints of yore had their own methods of calculations and their observations were based on a lot of research on what is able to affect people living on Earth.

Small planets, asteroids, etc. were never taken into consideration. However, asteroids gradually started getting importance in astrology, but moons of planets are not given the kind of importance that the planets themselves are given, in both the Indian and Western astrological systems.