Signs of Good Luck and Fortune 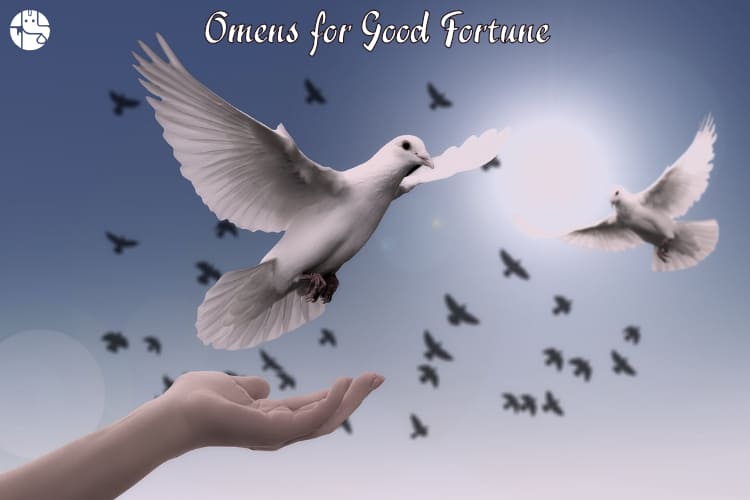 Many of us believe in signs of good luck coming. To look for and find symbolism in everything, particularly in aspects of nature are interpreted as good and bad omens. Now, what is an Omen?

An omen is viewed as a sign from the natural world that delivers a message of some sort indicating coming good or evil events. Omens and signs can be found in all aspects of nature.

Here is a list of good luck omens to look for if you want to have good fortune on an unlucky day:

When a cat comes into your house:

Golden cats signify good luck hidden in bad luck. They are believed to be an auspicious sign of good fortune. But it is better to chase Black & White Cats away as they signify betrayal and death respectively.

When a cat gives birth to Kittens in your home:

Giving birth to kittens by a cat is considered to be a good Omen for the head of the house owning the cat as it is believed that evil spirits will never enter such house. It is also believed that there will be prosperity in the family within three months. So it is considered highly auspicious for better fortune.

When a Butterfly Flies into Your Home:

If a butterfly flies to your home, it signifies good omen. This is commonly interpreted to mean that you are about to receive good news from some important guests. So never chase a fluttering butterfly out of your house as it is a symbol of receiving good news.

When Bird Droppings Land on Your Head:

Auspicious signs for prosperity coming your way. It is really yucky, annoying and a major inconvenience, when something like this happens to you, but now don’t be as this is described as prosperity being just around the corner. It signifies prosperity coming from paradise. So always welcome birds with open arms as they spell good fortune.

When Someone Gives You Money on a Lucky Day:

A lucky day is usually a new moon or full moon day. It is the surest sign that you will enjoy a significant rise in money. 15 days of the New Year’s first moon are regarded as “Days of Miracles”. Money received on these days is considered as lucky.

Simultaneous Appearance of the Rain and the Sun:

The simultaneous appearance of the sun and the rain is a very good sign indeed. It is supposed to be good for your career. You will receive the support of some very important people. Also getting married or the birth of a child on such a day is considered as auspicious.

It’s time to close your eyes and make a wish! Yes just make a wish immediately when you see a shooting star. Whatever you wish for will manifest within the next 30 days. A shooting star is considered as the auspicious sign for fulfillment of a wish.

Finding Your Initials On a Spiders Web:

It is an indication for good luck forever. Finding your initials on a spiders web signifies that all your obstacles blocking your projects will be dissolved.

When Bats Nest In Your Home:

It is one of the best signs of good fortune. It signifies financial and professional gains. So the next time when bats come and nest in your home, be happy because this brings good fortune.

Meeting Up With a Black Cobra:

It tones down all the malefic effects on your path. The king cobra is described as a snake of extreme good fortune. So never ever try to harm or kill a snake when confronted with one.

Below are some other common events in everyday life believed to be powerful indications of good fortune:

Talk to our astrologers to know Good Omens for career and business.

Omens may be considered either good or bad depending on their interpretation. These omens should happen naturally and not be made to happen; only then the signs can be interpreted as true.

Bad omens are a way of telling us that something bad may occur and that we should become alert to the bad times. If we do the remedies or become aware, then either bad time doesn’t come or the bad time isn’t as bad as it was supposed to be.

Know remedies for a bad omen. Talk to our astrologer now!