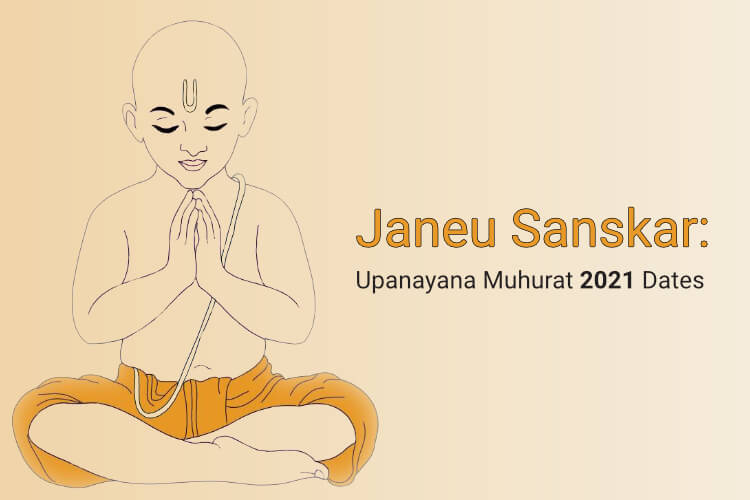 With many traditions followed in Hinduism, Janeu Sanskar (Upanayana Sanskar) is one of the most significant ones, even before marriage. It is the 10th sanskar described in ancient Sanatan Hindu Dharma. In this ceremony, the boy is made to wear a sacred white thread (Janeu) with various rituals. Various castes like Brahmins and Kshatriyas perform this Sanskar.

The word 'Upanayana' consists of two words; ‘Up” means near and ‘Nayana” means vision. Hence, this literally means keeping ourselves away from darkness (state of ignorance) and getting towards the light (spiritual knowledge). Thus, it is one of the most famous and sacred rituals. Today, we are talking about some auspicious 2021 Upnayan Sanskar Muhurats to plan for janeu sanskar.

Typically, Brahmins, Kshatriyas, and Vaishyas also hold a threading ceremony for the groom before his wedding. The ceremony is also known as Yagnopavitra. In Hinduism, everyone can wear Janeu except Shudras.

Now that you know Upnayan Sanskar Muhurats, here is why it is important and how the rituals are performed.

These are great times to get your Upnayan Sanskar done, but what about some other important events of the year? Decode them now with the 2021 Highlights Report.

Hindu religion holds a strong place for every tradition or custom followed in it. With the Janeu ceremony, a boy rises from his childhood to adolescence. To mark this advancement, the priest ties a sacred thread (Janeu) above the boy’s left shoulder and under the right arm. This Janeu is an interknit of streams of 3 threads.

Janeu mainly consists of three threads.  They represent Brahma, Vishnu, and Mahesh; they also represent Devaruna, Pitruruna, and Rishiruna. Moreover, some also believe they represent Sattva, Raha, and Tama. Four,  it symbolises the three stages of the Gayatri Mantra. The fifth is the symbol of the three ashrams. In the Sannyas Ashram, Yajnopavita is removed.

Nine Chords: Each chord of Janeu has three strings. Making the total number of strings nine.

There are five knots: Five knots are placed in Janeu, which represent Brahma, Dharma, Ardha, Kama, and Moksha. It is also a symbol of Panchakarma, Gyandarias, and Yajna, all of them are five in number.

Length of Janeu: The length of Yagnopavit is 96 fingers. It calls for the person wearing janeu to try and learn 64 arts and 32 disciplines. 32 Vidyas are four Vedas, four Upvedas, six Darshana, six agama, three Sutra, and nine Aranyakas.

Wearing a Janeu: While wearing Janeu, the child only holds the stick. He wears only one piece of clothing that is without stitches. A yellow fabric is worn around the neck. A yagna should be performed at the time of wearing the janeu, in which the child and his family will take part. The Janeu is worn after "Guru Diksha'', and it will be changed every time it becomes impure.

Gayatri Mantra: Janeu begins with Gayatri Mantra. There are three stages of Gayatri Mantra. ‘Tatsvituvarnrayan’ is the first stage, ‘Bhargo Devasya Dhimahi’ is the second stage, ‘Dhio yo na: Prachodayat’ is the third stage.

So, this ceremony holds a deep significance. You can read more about Janeu Ceremony Importance here.

Fun Fact: There are references to women also wearing janeu, but they wear it around their neck like a necklace. In ancient times, married men wore two sacred threads or janeu, one for themselves and one for their wives.

So how is Janeu Sanskar Vidhi performed? Here are the rituals followed by the Hindus on an auspicious Upnayan Sanskar Muhurat:

Talking about wedding, find out more about your future married life with Personalised Marriage Predictions.

Hold on, though! There are some rules to be followed when performing the janeu sanskar rituals. What are they? Let’s find out.

Here are the rules to be followed while performing the Janeu Sanskar Puja:

This is all you need to know about the process of Janeu wearing and the auspicious Upnayan Sanskar Muhurats of 2021.