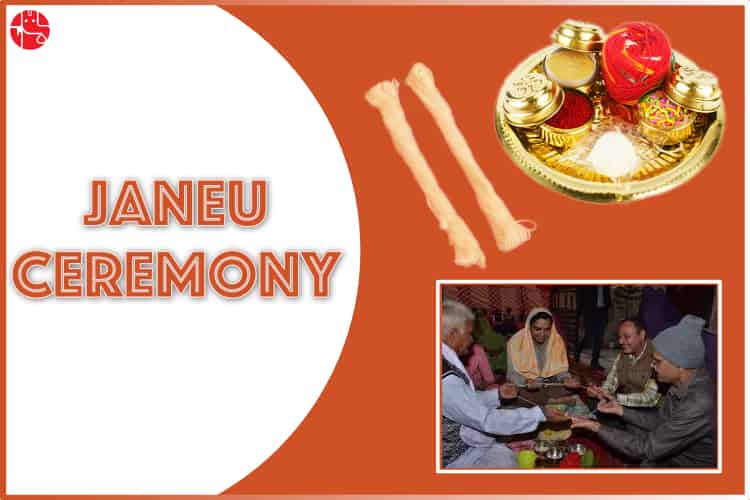 The Janeu Ceremony, also known as the sacred thread ceremony, is the traditional ceremony in which the Brahmins of India wear the consecrated thread.

Hindu boys wear the sacred thread or Janeu following a series of rituals and steps. It is performed when a Hindu boy is growing up. The ceremony is also called Upanayanam. Different castes have different ways of performing this ceremony.

The main aim of this thread ceremony is to suggest that the complete development of a man from his younger age.

Strands of sacred thread are not ordinary strands of threads. These strands also symbolise three Indian goddesses – Parvati, Saraswati and Lakshmi. It is believed that a man becomes complete only when he has the blessings of these supreme goddesses.

What is the right age to perform Upanayanam?

Traditionally, the ritual of Upanayanam or sacred thread ceremony is performed when a Hindu boy attains seven years of age. If for some reason, it has not been done by then this ritual can be conducted when a man gets married.

It also makes him eligible to participate in all the family traditions and rituals after this ceremony. This shows the social significance that this sacred thread portrays.

b) Three strands used in a sacred thread are joined by a knot known as Brahmagranthi or the knot of Brahma.
c) The three strands also symbolise the Hindu trinity – Shiva, Vishnu and Brahma.
d) For Hindu men to get married, the thread ceremony is a prerequisite. Therefore, before a Hindu groom weds, he has to undergo Upanayana. Usually, this ritual takes place a few days before the wedding.

What are the benefits Of Wearing Hindu Sacred Threads?

A scientific study has proved that those who wear a Janeu do not suffer much of a blood pressure problems in comparison to those who don’t wear it.

The sacred Janeu ceremony is always performed sitting cross-legged on the floor. This posture gives you many health benefits and keeps your back straight.

It’s said that if one ties a Janeu on ear then it’ll sharpen memory and also gives some health benefits like curing constipation and keeps your stomach healthy!

It is also believed that those who wear Janeu are free from negative thoughts and energy.

Ask our astrologers to know the shubh muhurat to perform the Janeu Ceremony.

Thus we can see that the Janeu thread is very sacred. It has to be worn after cleaning and purifying oneself.

Hinduism has many sacred rituals of which the Thread Ceremony is considered one of the most important rituals of Hindu rituals before marriage. It is significant in every Hindu family.