India-Kazakhstan will make great friends and will have good Diplomatic Relations, foresees Ganesha.. 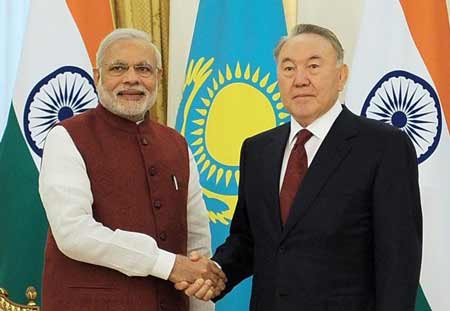 Prime Minister Narendra Modi recently visited  Kazakhstan in his recently concluded Central Asia tour and there seems to be a lot of positivity surrounding the relations between both the countries. India and Kazakhstan focused on boosting trade, energy, defence and security cooperation as Prime Minister Narendra Modi held talks with Kazakh President Nursultan Nazarbayev in Astana. The two sides inked five agreements, in defence, railways and uranium supply, sports and transfer of sentenced prisoners after the talks held at the Akorda presidential palace. So Ganesha takes a look at the Natal Charts of both the countries and predicts what lies ahead for both the countries and also analyses how the relations in the near future between the two countries be. Let's take a look... 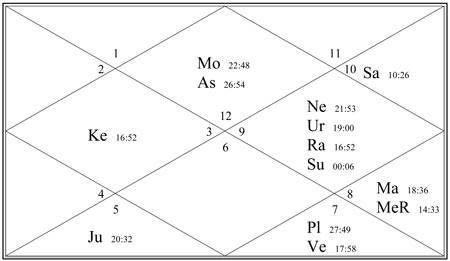 1) What do the Planets in the Charts of these two countries indicate? Do the Planets in both the Charts compliment each other?
Considering the Planetary positions of Natal Chart of India and Kazakhstan, Ganesha finds that there is great compatibility between the Planets of both countries which will surely result in common goal of progress/development for which both have united and signed various agreements. The very attractive and interesting points are that the  Ascendant and Jupiter, the lord of the 11th House (House of Gains) of Independence Chart of both countries are posited in sextile with each other. The Moon is posited in the Cancer sign in the  Natal Chart of India, whereas the Moon posited in the Pisces sign in the Natal Chart of Kazakhstan and as such they are in a Trine position with each other. All these factors indicate that both the counties will have better understanding, cooperation and coordination between them for reaching common conclusions and goals unitedly.
2) How will the relations between the two countries in the future be?
3) Will the recent agreements and pacts signed by Prime Minister Narendra Modi with Kazakhstan favour India?
Ganesha wishes good luck to INDIA and KAZAKHSTAN and expects to see a mutually progressive relationship between the two Asian Countries.