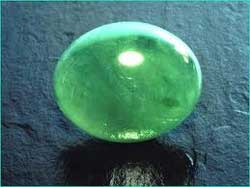 Name – ‘Jade’ is a gemstone, which is made of two different silicate minerals namely jadeite and nephrite.

Formation – Formed as a mass of interlocking granular crystals, in metamorphic rocks and also as alluvial boulders.

Available colours – Naturally, Jades are found in a variety of colours such as blue, violet, black, red, orange, yellow, mauve, white and pink. However, the most popular and commonly used colour of Jade is the imperial green colour – which is also popularly known as the ‘Jade Green’.

Fancy Fact – The toughness of jade has been found to be remarkable. It has a strength greater than steel, and was put to work by many early civilizations for creating axes, knives and weapons. It was only later that jade became a symbolic stone, used in ornaments and other religious artefacts.

Cosmic Connection – The gemstone Jade is said to correspond to the ‘Heart Chakra’ and that is why Jade is known to invite love. It is also known to help one get rid of mental and skin ailments.