Dhoni Announces Retirement – Once Again Ganesha Got It Right 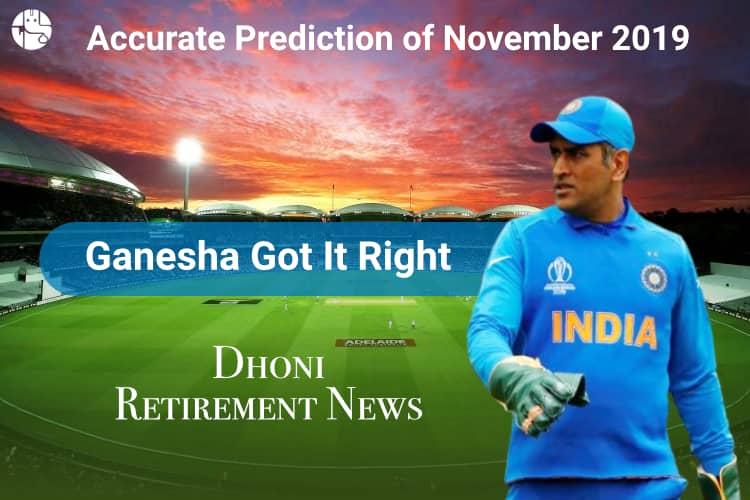 The Finisher of International cricket ends – Two-time world cup winning captain Mahendra Singh Dhoni announces his retirement on August 15, 2020, Saturday. ‘Consider Me Retired’ – Mahi has made this confirmation through a video on Instagram, bringing down the curtain on his 15 years long storied career. One of the country’s greatest limited-overs cricketers took a final decision to announce the end of an era.

Intense speculation for ‘when will Dhoni retire’ was not only the buzzword all around the nation but also worldwide when Dhoni broke his silence in media with the statement ‘Don’t ask until January’ in November 2019. Fans were waiting for his comeback, but after the 15 years of Dhoni’s unforgettable journey, a glorious chapter of Indian cricket has ended. Ganesha Got It Right! Yaas, the nation heard the Dhoni retirement news on the 74th Independence day. But Ganesha accurately predicts the retirement of Mahendra Singh Dhoni from the international cricket in November 2019, long before the official announcement from the horse’s mouth. The stars and planetary influences in the Mahendra Singh Dhoni’s birth chart accurately forecast his retirement before October 2020. And once again, it is proved that Ganeshaspeaks.com has an inseparable bond with Accuracy.

This is what we had predicted:

According to Mahendra Singh Dhoni Horoscope, the cool captain is under the influence of Rahu Mahadasha, and Mars Antardasha during most of the period in 2020 is substantially important for his international career and the Mahadasha was going to end October 2020. Ganesha predicted that the confusing phase of Mahi fate will get clarity before October 2020, and he will play his last games until that time. Before pandemic outspread, the World Cup T20 was scheduled to kick off on October 24, 2020, and hence he was not selected in the team. There are no international series to be played until October 2020 amid COVID-19, so Mahendra Singh Dhoni announces his retirement with an Instagram post of a montage capturing his career with the national team on August 15, 2020.

Mahi will be under the influence of Jupiter Mahadasha after October 2020, so he will remain connected with cricket by playing domestic cricket and premier leagues even after his retirement.

This is just an exemplar of accurate prediction, our expert astrologers have a lot more to serve you.

To get accurate Life Predictions, connect to www.GaneshaSpeaks.com, Now!