Effects of the Venus Transit in Scorpio on Pisces Individuals 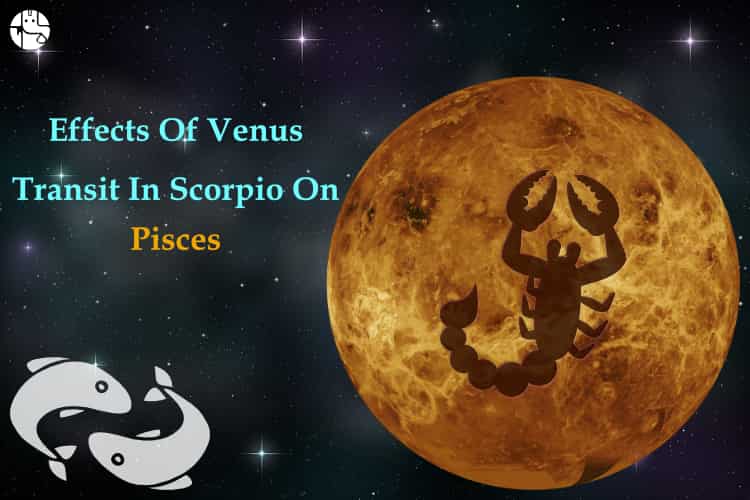 Venus, the planet of romance is transiting to water sign, Scorpio on October 28, 2019. The transit would give importance to the relationship at a personal and professional front. Individuals get close and deep in their personal relationships when Venus transits to Scorpio. It is because the planet is associated with relationships, love, and loyalty.

The planet is transiting to the ninth house in your birth chart of Pisces individuals as it is going to bless you with good luck and fortune. The progress is certain in career front and academics.

Effects of Venus Transit in Scorpio on Pisces individuals

(Kindly note: the below predictions are mentioned according to Moon sign.)

You are likely to progress at your career front. The tasks would be accomplished with efficiency and short term goals would be achieved at ease. You would be focused and sincere in your work which would help you to achieve your career goals.

Your fortune and luck would be in your favor. The efforts that you put in the work would give you the desired results. You would get support from colleagues and senior officials. Your opponents would not be able to harm you and ultimately you would win over them.

You would increase your knowledge base related to work. You may enroll for professional training or professional courses. This would help in increasing your skills and knowledge for work. The added knowledge and skills would be helpful in achieving future goals and targets.

The success is foreseen in various aspects of life.

Business will go smooth during the transitory motion of Venus in Scorpio. The business would grow and expand. The market share would increase and profit margin will also enhance. The short term goals and targets would be achieved at ease.

You would get an opportunity to travel to a pilgrimage or a religious place. You would have an inclination towards spirituality.

(Also Read: Effects of the Sun transit in Libra on Pisces Individuals)

Your relationship with your spouse would strong. Both will understand each other deeply and would be in a romantic mood. You will spend quality time in a romantic and serene place with your partner. The transit foresees a strong bond with a partner and your partner would be supportive. There is hardly a chance of disputes and arguments. If there are any it would be resolved much faster and no grudges would be built in the partner and your mind.

Health would be satisfactory. If you were suffering from any ailments then it would be cured gradually. No major health ailments are foreseen during the transitory motion of the planet in Scorpio.

Students would get success in pursuing higher education. You would be more focused on studies and would perform well in examinations. You are likely to get the desired results during the transit period.

There are chances of traveling abroad for higher education. The students who are trying to go abroad or waiting for a student visa are likely to get success during the transit period.

The transit foresees good luck and fortune in personal life, career, and studies. You should take maximum advantage of this favorable period and get fruitful results in various areas of life.