How severe will be the aftermath of the cyclonic Storm Nilofar on the coastline? Finds Ganesha. 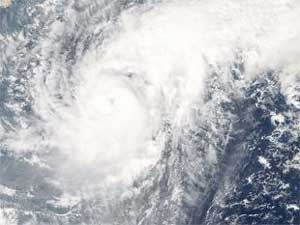 For the second time in the span of a month, a cyclonic storm is about to hit the Indian shoreline. Earlier this month it was the ‘Hudhud’ cyclone, which hit Bay of Bengal, affecting the coastal areas in the states of Andhra Pradesh and Odhisa, causing heavy damage to life and property. And, now it is the cyclone ‘Nilofar’, which is threatening to hit the coastal areas of Gujarat, on the other side of peninsular India. The cyclonic storm is expected to make a landfall on October 31 or November 1, and is believed to be mainly affecting Saurashtra and Kutch areas of the state of Gujarat. The storm is also expected to hit the Pakistani shoreline, near the famous city of Karachi, and also the border towns of Jaisalmer and Barmer in the state of Rajasthan on the Indian side. Meteorological department predicts that Nilofar could be accompanied by winds touching 100 kmph and heavy rains. Over 30,000 people are already being evacuated from the coastal districts of Gujarat to safer places.

Although some reports suggest that the intensity of the cyclone will weaken before the actual landfall, they do little to dispel the rising anxiety.

Ganesha looks at the planetary positions of the two red alert days – October 31st and November 1st – with the help of Vedic Astrology, to predict the likely severity and aftermath of cyclone Nilofar.

October 31st 2014
Ganesha took a look at the planetary transits’ Chart for the said date of 31st October 2014, and surmised that Shravan Nakshatra shall be in force. This Constellation/ Nakshatra is ruled by Moon. A look at the Chart of the independent India revealed that on this day there will be a conjunction of 5 planets, and Moon shall be transiting exactly opposite it. This total picture confirms the likelihood of heavy rains in many parts, specifically watery (coastal) ones, of India. Thus, there may be heavy rains preceding the cyclonic storm. Even if, Nilofer does make a landfall sometime around this day, Ganesha doesn’t see much negative happening on 31st October, except heavy rains.

1st November 2014
The planetary picture, however, on 1st November 2014 does not bode too well, as far as the weather disturbances are concerned. The Moon shall be in the Dhanishtha Nakshatra on this day, which is ruled by the aggressive planet Mars. Ganesha doesn’t see this as a good sign, as Mars is an indicator of forceful destruction.

Also, on the same day, Lord Saturn shall be making a major planetary move. Slated for somewhere around 2nd November 2014, Saturn’s transit to the Zodiac Sign Scorpio ruled by the planet Mars would have started to exert its influence by then. Saturn is leaving its Sign of exaltation Libra after over 2.5 years to move to the Mars ruled Scorpio, which is a very major planetary movement. And, whenever a major planet like Saturn changes Signs, its effect is palpable to some extent on the Earth too. It is noteworthy that Saturn is the second largest planet in the Solar system!

However, overall, there is good news, as Independent India’s Chart sees a good support from the benefic and steadying planet Jupiter. Jupiter, incidentally, is also bigger than Saturn. Hence, Ganesha hopes that Lord Guru’s (Jupiter’s) benign support shall bail Indian coastline out from this cyclonic storm, and there may not be too much damage to resources and lives.

Ganesha hopes for everyone’s well being and good luck!