Know how are Eclipses seen across the world 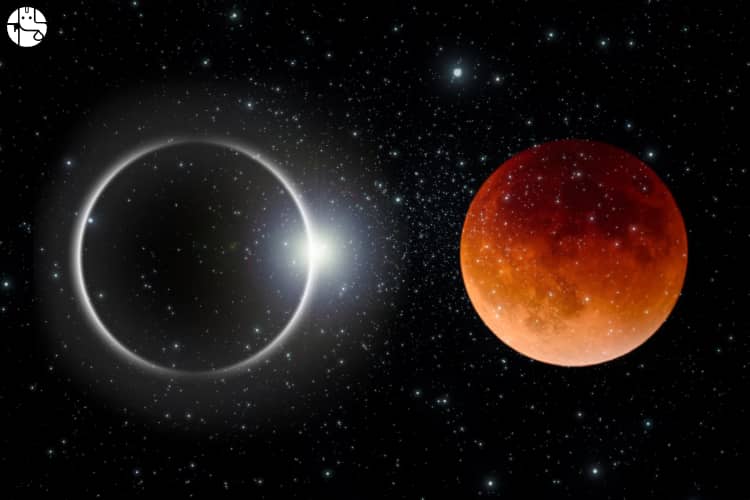 The developments in the sky have fascinated & intrigued humankind for a very long time. Till a few centuries back, people were unaware of the happenings even in that part of space which is close to our planet Earth. Space is full of mysteries. However, now we know many things around Earth or even in much of the solar system.

Well, among the most exciting events in the open sky are the Solar and Lunar Eclipses. Now, we know so much about these celestial phenomena. We know that Moon blocks the vision of Sun from Earth during a Solar Eclipse. We also know that the shadow of Earth blocks the view of the Moon during a lunar eclipse. These are now considered very elementary subjects in advanced Astronomy and Astrophysics. That was not the case in the past.

We are presenting here some instances of how solar and lunar eclipses were seen in the past.

How the ancients experienced the Solar Eclipse?

In ancient times, cultures tried to understand why the Sun temporarily disappeared from the sky, so they came up with various reasons for what caused a solar eclipse.

There were many cultures wherein the legends surrounding solar eclipses involved mythical figures consuming or stealing the Sun. Others interpreted the event as a sign of angry or fighting gods.

And as for China, people there believed that a celestial dragon thought to lunch on the Sun, causing a solar eclipse. Thus, the Chinese word of an eclipse is chih or shih, which means to eat.

Well, in ancient Hindu mythology, the demon Rahu was beheaded by the gods for capturing and drinking Amrita, the Gods’ nectar (Amrit). The head of Rahu flies off into the sky and consumes the Sun resulting in an eclipse.

Korean mythology has another explanation for solar eclipses. It says that solar eclipses happen because mythical dogs are trying to steal the Sun.

Well, people in several cultures traditionally get together to bang pots and pans and make loud noises during a solar eclipse. It is believed that making a noise terrifies the demon causing the eclipse away.

How Was The Lunar Eclipse Seen In Different Parts Of The World?

In Mesopotamia, a lunar eclipse was considered a direct attack on the king. As they could predict an eclipse with reasonable accuracy, they would put in place a proxy king for its duration. Someone who could do it would pose as the king, while the real king will hide and wait for the eclipse to pass. The proxy king would then disappear, and the old king is reinstated.

As for the Indian mythology also known as Hindu Astrology, people saw lunar eclipses as the result of the demon Rahu drinking the Amrit (elixir) of immortality. The two deities, the Sun and Moon quickly decapitate Rahu, but having consumed the Amrit, Rahu’s head turns immortal. As revenge, Rahu’s head chases the Sun and Moon to devour them. If he catches them we have an eclipse – Rahu swallows the Moon causing the eclipse.

And in Islamic cultures, eclipses were interpreted without superstition. In Islam, the Sun and Moon indicate a lot of respect for Allah, so during special eclipse prayers are chanted, including a Salat-al-khusuf, a “prayer on a lunar eclipse”. It seeks Allah’s forgiveness and re-establish Allah’s greatness.

On the other hand, Christianity has equated lunar eclipses with the wrath of God and often identifies them with the crucifixion of Jesus. Notably, Easter is the first Sunday after the first full Moon of spring, ensuring that an eclipse can never fall on Easter Sunday, a potential mark of Judgement Day.