What Is The Significance And Benefits Of Offering Water To The Sun In Hinduism? 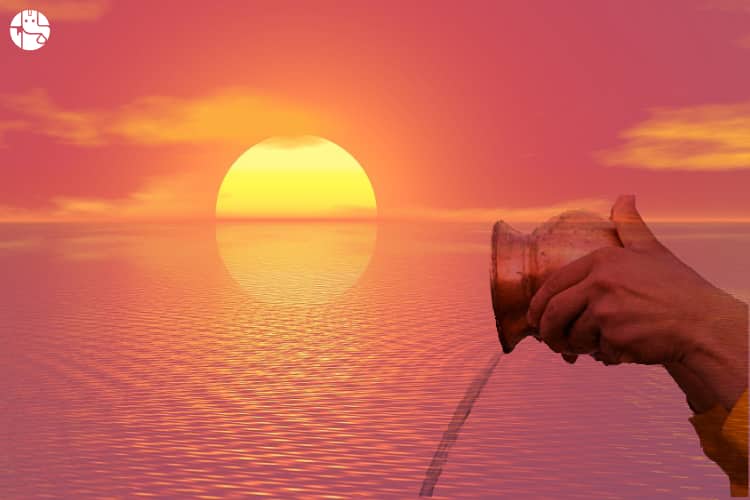 Sun is one of the most powerful deities in Hinduism. He is a God with great capabilities and powers. Rig Veda – the oldest Indian scripture describes the divine and powerful Surya in a Vedic mantra. He is the ultimate source of light and the origin of the universe. It is said that the Sun is amongst most ancient Gods in Hinduism. Other than Hinduism, many more religions around the world worship Sun due to his greatness and grace.

In Hindu Mythology, Sun is portrayed as riding a chariot driven by seven horses. These horses represent the seven Human body Chakras and rainbow colors. He often carries lotus as a symbol of life, Sankha (conch), Chakara (discus) and Gada (mace). Surya is ranked higher than many Gods due to his incredible ability to nurture life on earth and healing powers. Surya in Hinduism is considered to be an eye of the Virata Purusha (The universal form or Supreme Being). Many groups such as saints, asuras, rakshasa, and human beings worship Surya as one of the five supreme Gods.

Forms and popular names of Surya

Surya is worshipped in many forms, but two of them are most common: Arka and Mitra. In Northern or Eastern states of India, Surya is praised in the form of Arka. There are many temples built for the worship of Surya in ancient times. Some of the most popular and renowned temples are Konark Temple in Orissa, the Uttararka and Lolarka in Uttar Pradesh, the Balarka temple in Rajasthan and the Sun Temple at Modhera, Gujarat. In the tenth century, there was a Balarka Surya Mandir built in Uttar Pradesh, which was destroyed by the Turkish invasion in the fourteenth century. The other form of Surya is Mitra, which is mostly found in Gujarat. In the Gujarati language, the term Mitra means Friend.

How to worship the Sun God and its benefits?

There are many advantages of worshipping Surya every morning. It boosts energy, confidence and improves communication. It welcomes peace and harmony in life by eliminating the negative effects of Grah Dosh. Surya prayers have the power to help us get rid of our troubles and showers prosperity in health and wealth. Mostly, people who are seeking success, courage, strength, and a healthy body should worship Surya deva.

There is a particular way to worship God Surya and one must follow it to get the desired outcomes. To start the worship, bathing is foremost important as it purifies your body, soul, and mind. If you are willing to do fasting, it shall begin with the sunrise of the day and ends on the second-day sunrise. Before starting Surya Puja worshiping lord Ganesha is mandatory. As per our scriptures, donating clothes to Brahmin is recommended after the puja. Also, things like Rudraksha mala, kumkum, mouli, Surya Yantra, hawan kund samagri, prasad, ghee, fruits, betel leaves, and coconut are required to offer worship to Suryadev. Here are the steps to follow for performing Surya Puja:

Here, your Surya puja is complete. Repeat it every day to get the blessing from God. Some of the incredible benefits of offering regular water to Surya is that it makes you disciplined and maintains the body, mind and spirit balance. The first ray of Sun inspires for early success in daily life. It grants you all pleasures, good health and wealth in life.

According to ancient Indian custom, offering Arghya to the sun gives you mental, physical and practical endurance that overcomes every conflict. Regular worshipping makes one a scholar, master of pithy with effective voice and intelligent. At the same time, it removes ego, anger, greed, desire and evil thoughts from a person’s mind.