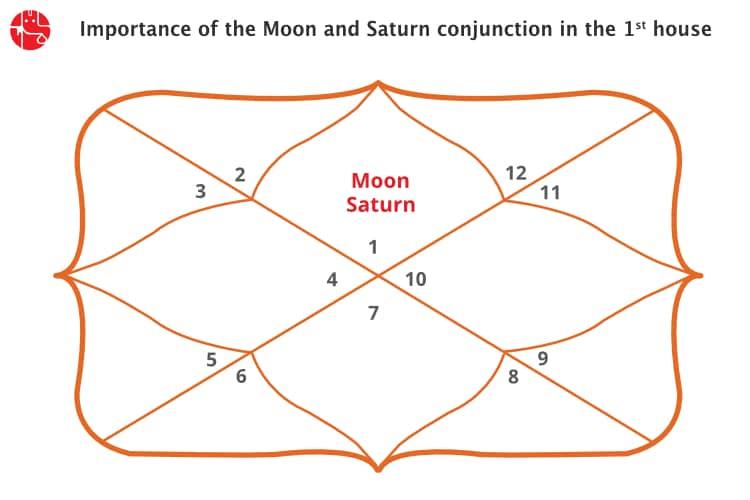 The combination of Moon and Saturn is not considered to be good conjunction. They don’t match as they are at odds with each other. And they have ample points to be against each other. While Moon is a female benefic planet, which is watery, Saturn is an airy gender-neutral malefic planet. Moon is a super-fast planet while Saturn is the slowest moving celestial body in the astrological planetary system. So, the two planets are at loggerheads with each other. And when planets fight each other, they usually try to nullify the strengths of the other. At the same time, this movement is not always unfavourable. Well, the presence of Moon and Saturn conjunction in the 1st House indicates that the native is quite upright, hard worker and loves justice in his/her surroundings. However, it also characterises a serious outlook towards life which may turn to a negative mindset, if the situation turns even somewhat unfavorable.

The areas affected due to Moon-Saturn conjunction in the 1st House:

Those who have Saturn and Moon in the same House are likely to be very ambitious, and they will walk the path towards success through their own efforts. These natives will be very righteous in their approach; they will be dead against injustice and will always try to strengthen impartiality and promote a sense of fair play.

Are you perturbed by partiality at your workplace? If yes, you can Avail Remedial Solutions for Career and set to rest your difficulties.

The righteousness which they believe in, they also want to establish it in the world. They expect the same ethical standards from others, which always can not happen. Still, they will get a group of like-minded people who stay committed to them. The natives of Moon conjunct Saturn in the 1st House will be popular amongst their friends and well-wishers.

The natives of Saturn and Moon conjunction in the 1st House may have had fewer social and interpersonal interactions during their childhood. Thus, they may turn out to be gloomy. The natives may even suffer from depression. They will not enjoy the pleasurable things and may tend to weep over small and petty issues.

Rise above small things. Get success and happiness in life by knowing your future, Access the Janampatri.

The placement of Moon-Saturn conjunction in the 1st House may make the native quite pessimistic and melancholy in certain situations, which may affect their positivity and contentment. They should try to be optimistic as far as possible. The natives may even get driven towards vices such as drugs, alcohol, smoking, and so on. Also, the natives may face problems in areas like marriage, progeny and the relationship with your mother, as per Saturn Moon conjunction Vedic astrology.

Well, the combination of Moon and Saturn leads to a different kind of life. It is also considered restrictive conjunction because it makes the native emotionally chained to the memories of the past, particularly the memories about the materialistic things.

The natives of Moon Saturn conjunction in the 1st House are advised to come out of the emotional bondage and undue attachment to the past. They need to increase their strengths and eliminate their weaknesses. They should try to practice self-control. They should be engaged in constructive targets and goals.

The combination of Moon and Saturn in the 1st House can create difficulties for the natives. The two planets fight each other, and each one tries to nullify the good points of the other, leading to complex situations and happenings. The natives are likely to be melancholy and pessimistic. Also, the natives may be overly attached to the past, which may make them very thoughtful and introspective.