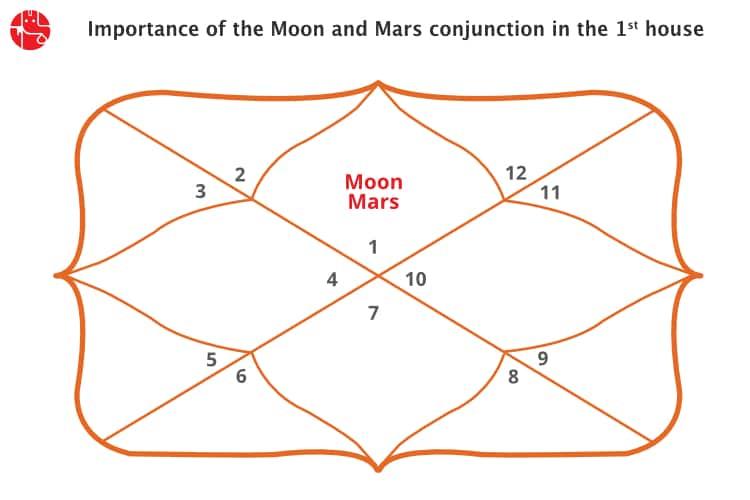 Well, the planets Moon and Mars represent contradictory characteristics. While Moon is a female peace-loving celestial body, Mars is a very short-tempered and energetic male planet. However, the two planets are friendly with each other. So, when the two planets meet, their seemingly contradictory energies come together to create an individual who is hyperactive, hot-headed, emotional, dicey, rigid and ambitious. Basically, the Moon-Mars conjunction implies that the surge of energy is getting somewhat well-placed and somewhat misplaced. So, a lot depends on how the inherent (karmic) traits of the native (as deciphered by Astrology) work out in real life. It depends on the choice which the individual makes during the course of his/her life.

The areas affected due to Moon-Mars conjunction in the 1st House:

If Moon-Mars conjunction happens in the 1st House, the native may be of a fair complexion and magnanimous. As per certain classical authors, the natives of Moon and Mars conjunct are brave, valorous.

Besides, the natives of Moon and Mars conjunction will be very work-efficient. They will get into the projects quickly and fervently and without bothering about the consequences of doing the task. They may pursue professions of an artisan or metallurgist.

Do you have problems in your profession? Buy the Remedial Solutions for Career and get them sorted.

These natives may be full of emotions. But in case there are good planetary aspects, they may reign in the feelings and emotions, and the energy may be used for some better and constructive purpose, as per Moon-Mars conjunction Vedic astrology.

At the same time, the natives of Moon-Mars conjunction in the first house will enjoy good health. This would be a direct consequence of the stringent health and hygiene measures which they adapt during the course of their life.

In certain situations, the Moon-Mars conjunction may cause problems. The native must be polite in his/her speech and conduct. He/she should control his/her talks and utterances. However, that is not the case with the Moon-Mars conjunction, which makes the native less tactful. The person with this planetary combination may say the wrong thing at the wrong time, which may tarnish his/her image badly. They should avoid hurting others as it may lead to a difficult situation.

Do you want to know what difficulties are yet to come in your life? Buy the Janampatri and know your future.

The conjunction of Moon and Mars in 1st house also indicates impulsive acts and opposing all control and authority. Besides, if there is an affliction in the Moon-Mars conjunction, it may lead to a loss of vitality, blood-related disorders and strained relationship with mother. The conjunction of Moon and Mars in the first house can make the native quite rebellious. There may be outbursts of anger and a surge of emotions.

The natives of Moon-Mars conjunction in the 1st house may be impulsive in their spending habits. Thus, they may not be very wealthy as they don’t believe in saving money. They may be full of desires. They may be quite talkative.

The natives of Moon conjunct Mars in the first house will see the things through coloured glasses. They may have strong biases, which may make them quite intolerant, hasty and rash. This may enhance jealousy, anger, frustration and lead to disastrous acts.

Moon and Mars form a very interesting combination of calm creativity and hot energy. Fortunately, the planets are good friends of each other. So, if their energies get along well, it will lead to an effective and efficient individual. On the other hand, if the two energies become incompatible with each other, it may make the native’s life quite difficult.