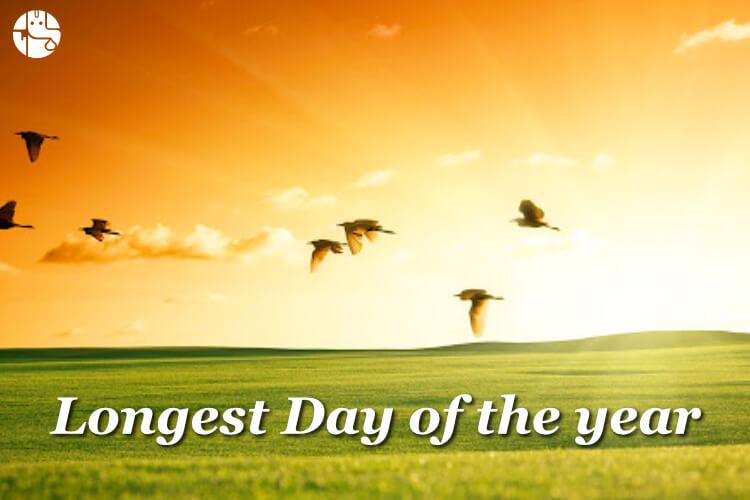 When the Sun rises and sets the foot onto the outreach North or South positions on the equator, this phenomenon is known as Solstice. Furthermore, in many countries seasons are based on the Solstice. The Sun that remains in one place is said to be Solstice.

Longest Day of the Year

If you are also the one who is curious to know ‘What is the longest day of the year?’ then peeps here’s your answer. In the Northern Hemisphere, the Longest Day of the Year mainly falls on or around 21st June. On this day, it is noticed that the rays of the Sun are in the perpendicular position of the Tropic of Cancer at 23 degrees 30’ North Latitude. However, the date of the longest day of the year may change based on a particular year or time zone of the country.

In the year 2021, the longest day of the year is on 21st June 2021. As the Sun’s position is in the Northern Hemisphere, the alternative name of it is the Northern Solstice.

Know the position of the Sun in your birth chart and its impact on you with the help of Free Personalised Janampatri.

What Day is the Longest Day of the Year in India?

The Longest and Shortest Day of the Year

Worried about your future? Let our expert astrologers bring the ray of sunshine. Talk to Astrologers.

What is the Summer Solstice Aka the Longest Day of the Year?

The longest day of the year is known as the Summer Solstice and falls on June 21. Summer Solstice occurs every June 21 and is known as “The Longest Day of the Year.” For those that live north of the Equator, the Summer Solstice occurs when the sun is precisely above (over-headed) the Tropic of Cancer (23.5° north latitude). It is the start of summer, while in the southern hemisphere, it is the start of winter. The longest day of the year marks the sun’s longest travel in the sky and we experience sunlight for a more extended period.

What is the Winter Solstice?

We talked about the longest day of the year, but what about the shortest? Cannot do this partiality, right?

Well, Winter Solstice is the shortest day of the year that falls around 21st December or 22nd December. During the Winter Solstice, the Sun’s stay in the sky for a shorter duration, and the night extends for a longer period. The alternative names of Winter Solstice are Mid-winter and Dongzhi. The Winter Solstice indicates that the Sun is away from the earth, and sunlight will not be found for an extended period.

In Vedic Astrology, the Solstice holds great importance. It is considered that the solstice is the beginning of summer and winter, and there are two seasons, spring and autumn. These seasons relate to the Cardinal signs of the zodiac wheel that helps to find the angles of a birth chart. Also, in the summer solstice, the sun is over the tropic of cancer and affects the Cancer Zodiac sign i.e Cardinal sign. Whereas in the winter solstice, the sun appears on the tropic of Capricorn and hence affects the Cardinal sign Capricorn. This day has a major role to play in terms of birth charts, prediction, events, and celestial shifts.