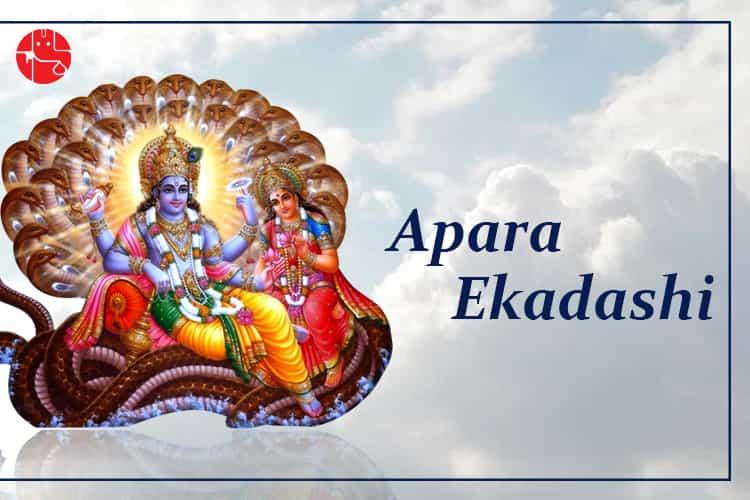 Ekadashi falls on the eleventh tithi of the lunar phases according to the vedic calendar month. The shining phase of the moon is called the shukla paksha, while the darkening or the waning phase is called the krishna paksha. The details about this can be found in the Charaka samhita and sushruta samhita. There are 24 ekadashi in a year. One of them is Apara Ekadashi. It is considered as one of the most rewarding ekadashi of all. Ekadashi is celebrated to please Lord Vishnu. Lord Vishnu forms the trinity of gods. This ekadashi is celebrated all across India to gain wealth and prosperity.

Apara EKadasi comes in the Jyestha month of the Hindu calendar between May and June of western astrology. This is one of the ekadashi to fall during the Krishna Paksha of the Jyestha month. Apara Ekadashi has several names like Jayestha Krishna Ekadashi, Bhadrakali Ekadashi or Jalakrida Ekadashi. This is considered the most glorious ekadashi of all.

The ekadashi fast is done to remove the sins from life, to get the blessings for good deeds and individuals who follow the complete ritual and fast on this day will gain fame and respect in society. The ekadashi vrat is the passage to salvation, and a person gets rid of all wrongdoings in his life. Let us know the timing for this ekadashi in the year 2023.

Apara Ekadashi Date And Timings For 2023

As already mentioned, this Ekadashi generally falls in the Jyestha month of the Hindu calendar during the Krishna paksha. According to the western calendar, this falls in the months of May and June. The Apara Ekadashi 2023 dates are mentioned below.

This ekadashi falls in summer, so those whose health is debilitated or have some problem can skip the fast. Worshipping Lord Vishnu with full devotion is more important. This ekadashi will help you attain immense wealth and property. So let us find out the vrat katha and Apara Ekadashi significance.

The mythology of Apara Ekadashi story goes back to ancient times. There was a ruler named Mahidhwaj, who was kind and level headed. He was a kind-hearted ruler, but his younger Vajradhwaj was exactly the opposite in nature compared to his elder brother. His heart was filled with malefic intentions against his brother, and he never liked his brother’s pious behaviour. He was always looking for the opportunity to kill his brother and attain his power and kingdom. He did that exactly and buried the dead body of his brother under the peepal tree in a dark forest.

But according to destiny, Mahidhwaj met with premature death, and thus his soul took the form of a ghost. His spirit used to wander beneath the Peepal tree. The spirit used to annoy any passerby , and this had become a headache for people passing through the tree. One day, a rishi was going through the same path and exchanged dialogues with the ghost of the king. He asked the king why his soul is still wandering. The spirit of the king told the story, and the sage, with his power, freed the spirit and taught him about the afterlife.

According to popular belief and Hindu mythology, it is believed that the importance of this Ekadashi was narrated by Lord Krishna to King Yudhishthira. One who performs this ekadashi vrat and rituals gets rid of past and present misdeeds and moves on the path of positivity. One of the main reasons for performing this ekadashi is to achieve immense wealth, fame and respect in society. It is also believed that the person may get out of this cycle of rebirth and death and reach the ultimate gate of moksha by performing the rituals of this ekadashi with utmost devotion.

According to few religious experts, it is believed that those who observed this vrat will get benefits equivalent to taking a holy dip in the Ganga during the month of Kartik. The good karma and deeds earned by doing the puja of Lord Vishnu during Apar Ekadashi are equivalent to donating a thousand cows and performing yajnas. But to attain the benefits of this ekadashi, one should know how to perform it. Performing the rituals and vrat is the key to success. For performing a successful puja, please Book an online puja consultation.

How To Perform Puja Vidhi And Fast For Apara Ekadashi ?

It is believed that observing the fast on the day of Apara Ekadashi will allow the body to get rid of its sins and surrender itself to the cosmic oceans. The basics for performing all the ekadashi is somewhat similar. The devotee performing Apara Ekadashi has to wake up early in the morning and take bath before initiating any rituals for puja. The Vidhi and Vrat include the following things.

A Person observing the Apara Ekadashi should start the vidhi from one day prior to the ekadashi. Ekadashi falls on the 11th day, so the devotee should not eat anything after the sunset on dashami. He should offer prayers to god before his sleep. During the morning of Ekadashi, he has to wake up before sunrise, take a bath and wear clean clothes. He has to take the pledge to start and complete the fast by taking water and flowers in his hand.

For puja and worship of Lord Vishnu, a yellow coloured cloth or even a wooden stool is placed in the east direction. An idol in the photo of Lord Vishnu is seated on the cloth or the wooden stool, followed by lighting the diya and incense sticks. This marks the beginning of the puja , and one with utmost devotion should pray to lord Vishnu. The worship of lord Vishnu is incomplete without adding Tulsi leaves along with Chandan, betel leaves, betel nuts, cloves, fruits and Gangajal. After the puja, the devotee should not consume any food and recite the Apara Ekadashi Vrat Katha. Prasad is prepared and it is offered to lord Vishnu and then distributed among the devotees. Few of the observers also visit Vishnu temples to gain the blessing of Lord Vishnu.

To get the benefits of this Ekadashi, one should not tell lies, have evil thoughts or try to do any harms to others. During the day of Ekdashi, no tamasic food should be cooked, and the use of garlic and onion is not allowed. Any kind of grains or rice is also prohibited. Reciting Vishnu Sahasranama will give you the special blessings of lord Vishnu. While on the day of Dwadashi, wake up early and offer prayer and show respect to the Lord as per the ritual. This should happen before the commencement of Parana Muhurta, and after that, one can open the fast.

Apara Ekadashi holds great significance mentioned in the puranas and vedas. Scholars believed that a successful Apar Ekadashi vrat and ritual would give the devotee with popularity and fame. The native will be bestowed with gifts and wealth. It is equivalent to donating gold. Also, as per the vrat katha, by performing this Ekadashi will relieve a native from the sins of Brahma Hatya, Parninda and Pret Yoni. But gaining materialistic gains should not be the only approach of the devotee. Instead, performing the Vrat and puja with utmost devotion will lead the path for salvation and get rid of your sins. As Ekdashi is all about worshipping lord Vishnu, bringing a Vishnu Yantra may bring an air of harmony and prosperity in your life. Order your Vishnu Yantra right now.

Attract Good Luck With Your Personalised Horoscope On The Auspicious Day Of Apara Ekadashi! – Talk To Expert Astrologer Now First Consultation with 100% Cashback!