Delhi Daredevils will not regret signing Yuvraj Singh for a whopping amount for IPL 8, feels Ganesha. 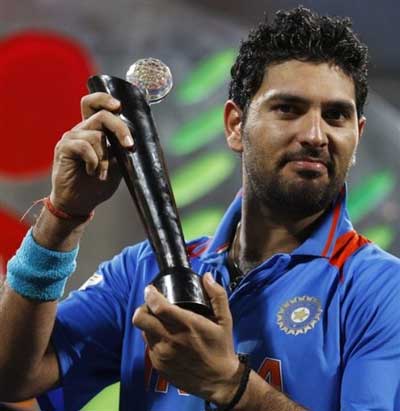 Even the mightiest of the boulders have not managed to stop the flowing, gushing, clear streams of water – potent and pristine in all their glory. This thought may have yet again hit many of the cricket fans and critics across the world, when Yuvraj Singh, the talented Indian all rounder, cricketer, few days ago, was signed at the highest ever buying price in the Indian Premier League. The sum is a whopping Rs. 16 Crores, and in IPL 8, Yuvi shall be playing for the team Delhi Daredevils.

One of the hardest hitters of the ball in the contemporary international cricket, Yuvraj Singh is a fighter to the core. The 2011 World Cup-winning hero, who was also aptly named the Man of the Tournament, was soon after diagnosed with cancer, which started a long battle for him and tedious stint of treatment in the US. Much to his ardent fans’ happiness, Yuvi recovered, but, as predicted by GaneshaSpeaks.com team ( /yuvraj-singh-world-cup-2015/ ), sadly he couldn’t make it to the 15 member Indian squad for the ICC CWC 2015. But, with one door closing on to him, another surely and lucratively opened for him. Ganesha takes this opportunity to look at Yuvi’s Birth Chart to predict the way ahead for him.

Now, both of these are pretty challenging transits, and can be blamed for his disappointing performances as well as his inability to establish himself again in Team India.

However, currently transiting Jupiter through Cancer is aspecting Yuvi’s Natal Sun as well as his 10th House’s Lord Mercury. So, he has managed to bounce back from his latest disappointments, and received the highest price – for any individual player in IPL.

Yuvraj Singh, by now, has never been able to play, as per his real potential in the IPL. But, now he is passing through his Saturn Mahadasha and Saturn Bhukti. Saturn is placed in his Chart’s 10th House with strong 5th House Lord Mars. Also, the Saturn-Saturn-Ketu period for him – that will be in effect, during the IPL-8 season will help him significantly.

Thus, it is very likely that Yuvraj Singh will gradually get his rhythm back in the IPL 8 matches. His unbeatable spirit, determination and ability to fight adversities will help him emerge stronger, and it will also help the Delhi Daredevils to win some important matches. However, overall, the planetary configurations suggest that his performance will remain inconsistent.

But, Yuvraj Singh will surely bring positivity and enthusiasm to his team, and his performance will be much better – especially compared to the recent times – during the forthcoming IPL season. Ganesha wishes him well.