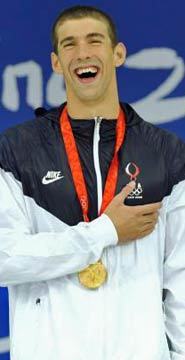 Introduction:
Time is again set for Michael Phelps to show his spectacular performance during the Summer Olympics 2008. Phelps, born on June 30, 1985 in Baltimore, Maryland is an American swimmer and the world record holder in several events. The winner of six six golds and two bronzes at the Athens Games now seems to be in his full-form to give a tough competition to his rivals during eight to ten events which are going to be held in Beijing. It can be the best chance for him to break Mark Spitz’s record of seven gold medals in swimming championship at a single Games.

Ganesha conducts an analysis of his Sun chart, as his birth time is not available to predict his forthcoming performance.

Mars and Sun, both are fiery planets and most important for the success in sports. This planetary position makes him aggressive with strong sports spirit. Also both of the planets are in the same constellation, Adhra which is ruled by Rahu, is placed in the eleventh house from Sun as well as Mars. All these are favourable planetary positions and promises to create the wining situation for him in the field of sports i.e. swimming.

Summary
Ganesha foresees him as one of the best performers in swimming. Michael Phelps will reach notable heights of achievements in the Olympics 2008. As his current planetary transits are favourable, Ganesha feels that Michael Phelps will secure highest number of gold medals at the Beijing 2008 and bring laurels to his country.

Ganesha wishes all the luck and may Lord Ganesha bless Michael Phelps.