Was Gauti’s decision right? Ganesha’s take on the ‘Gambhir’ issue 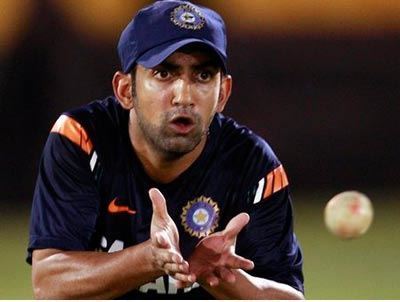 Gambhir, the left-handed opening batsman of the Indian cricket team has been a prolific run scorer for the country over the past few years. He has a number of records, awards and recognitions to his credit. Gauti, who was named captain of the Indian Twenty20 and ODI team for the forthcoming
West Indies tour in the absence of MS Dhoni, has now been ruled out of the tour because of a shoulder injury. Nothing unique about it, except for the fact that, instead of getting it treated to become fit in time for the West Indies’ tour, he chose to play with it in the just-concluded IPL for the Kolkata Knight Riders, which has ignited a CLUB-over-COUNTRY debate throughout the nation. On one extreme of the debate is former India captain Sunil Gavaskar who says that cricketers who choose IPL over the national team should not be selected in future, and on the other extreme is another former India captain Kapil Dev who says that like any individual of the country, cricketers also have the right to choose whether to play for the country or for their clubs.

As the debate rages, Ganesha, with the help of Vedic astrology, asserts that Gauti, for all the leadership skills that he is gifted with, has probably lost out on a golden chance to lead the country, and that the incident should serve as a lesson for budding Indian cricketers. 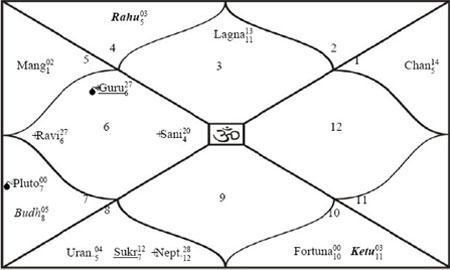 The 3rd House is the House of enterprise, thinking skills, dexterity and curiosity. A strong 3rd House Lord provides a competitive edge and powerful shoulders. It makes the person courageous and sports-oriented. It gives the person an extraordinary ability of succeeding by the sheer dint of self-effort. Gambhir has 3rd House Lord Sun placed in the 4th House along with the Yogakaraka Saturn and 10th House Lord Jupiter. Sun is also Atmakaraka and becomes powerful by being Vargottama. The Sun-Saturn-Jupiter in 4th House is forming a powerful Rajayoga which has earned him fame and recognition. In fact, the Sun Mahadasha has lifted his career immensely. The 6th House, which is an Upachaya House also plays an important role in the
life of a sportsman because it is the House of competition. A strong 6th House Lord in the 3rd House can be a boon for a sports person. Gauti has 6th House Lord Mars in the 3rd House and becomes strong by being in its own Navmansa.

The Moon Mahadasha-Mars Antardasha (between July 2007 and February 2008) was a glorious period when he performed very well and became India’s top run scorer.

As the Sun is very powerful in his chart, he has great leadership qualities which he has proved by taking the KKR team into the semi-finals of IPL 4. But he is the man in the middle of the latest ??????club-over-country debate??????. He is currently under the influence of Moon Mahadasha and Saturn Bhukti. Saturn is the Yogakaraka and involved in Rajayoga which had given him a chance to become India’s captain. But the Moon is placed in the 8th House from natal Saturn and the transiting Saturn is moving over the natal Sun and Saturn, which has denied him the opportunity.

Preferring club over country has proved to be a costly mistake as he missed the opportunity to lead the national team. In fact, it’s a lesson for both the players and BCCI. We cannot expect much from BCCI but definitely hope that players will prefer to play for the country’s pride in future. The controversy can be a blessing in disguise for Indian cricket.