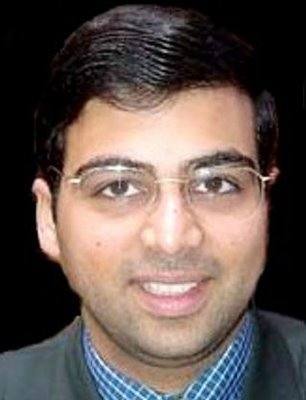 Introduction: Viswanathan Anand became the youngest Indian to earn the title of IM at the age of fifteen. His prowess at quick-play chess earned him the nickname “The Lightning Kid.” In 1987, he became the first Indian to win the World Junior Championship. At the age of eighteen, he became India’s first grandmaster.

Chart Analysis
He has Libra Ascendant, a sign of fairness, level-headedness and easy-going manner. His Sagittarius moon is a forceful, aggressive and positive factor. It is placed in the 3rd house with Mercury the Lord of 9th house, which means Enduring fame. Moon is in Virgo Navmansa and Mercury is in Gemini Navmansa so he is a textbook case of the focused, sometimes obsessive individual. He has Atmakaraka Sun placed in the Scorpio in the star of Mercury. The chess scene presents the perfect background for exercising Scorpion birthright of dictatorship. Mars, the planet of attack, is in the 5th house with Rahu forming Rajayoga and confirming abilities to perform at the highest level and further gets strength by exchange with Saturn.

Sun is the Atmakaraka and Karakamsa becomes Aquarius and if Karakamsa applies in the natal Chart we find Sun and Venus in the 10th house and Moon-Mercury in the 11th house with 1st and 3rd house Lord in exchange. It’s a fantastic Yoga for fame and success.

Debacle in Bilbao
He finished 6th and was placed at the bottom of the list recently in the Grand Slam Chess Final Masters Bilbao scoring only 8 points. The world’s elite tournament got into an unsavoury controversy due to the application of the football scoring system. Anand’s position was definitely uncomfortable during the entire competition. The transiting Ketu was in tight conjunction with the mid heaven affected him severely. He was also under the influence of Rahu-Rahu-Jupiter period during the tournament. Rahu is placed in the star of Jupiter which is another factor of his failure. Saturn is placed in sign Aries and in Gemini Navmansa. The dispositor of sign Mars and dispositor of Navmansa Mercury were in conjunction is also responsible for his debacle.

What next?
He is currently under the influence of Rahu Mahadasha and Rahu Bhukti and Rahu is well placed in the D-10 chart. But the transiting Rahu in Capricorn looks challenging for him. It is not all over yet but his Number 1 position is under threat now. It may become very tough for him to retain his position. We might see the champion struggling to remain on top in year 2009 and the period from mid November 2009 looks particularly difficult for him. Shubh Muhurat in June 2023 : Know Some Auspicious Days and Timings... Shubh Muhurat in May 2023: Know Some Auspicious Days and Timings... Shubh Muhurat in March 2023 : Know Some Auspicious Days and Timings...