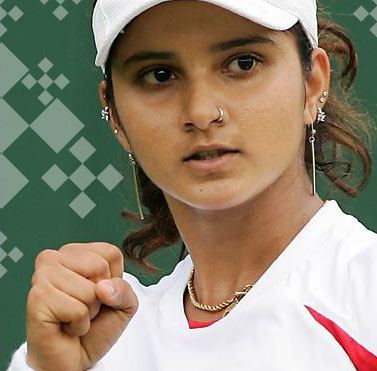 Introduction: Indian tennis sensation Sania Mirza has had a poor season. She has been struggling with her poor form and many injuries in this season. Right from the time she announced her arrival on the big stage she has been in the limelight for more than tennis reasons. There has been a lot of talk over the past couple of years that Sania Mirza is all media hype and a little substance.

In the light of the above, Ganesha predicts her year ahead and tries to find answers to the following questions Will she be able to attract the attention for right reasons? Will she be able to live up to the expectations of her millions of Indian fans in the year 2009?

Chart analysis
Sania Mirza was born in Capricorn Ascendant with exalted Mars situated therein forming Ruchaka yoga- one of the Panchamahapurush Yoga indicating a strong character and force of will Adding to this, Venus- the Lord of 10th house (house of power, success and fame- is situated in its own house confirming success and fame. Mars and Saturn are in exchange adding greater flavor to her strength. Sun is in the 10th house forming Neechabhanga Rajayoga. In fact, it is the Sun period that has made her career reach such dizzy heights. Rahu is strongly placed in the 3rd house suggesting a tremendous will to achieve goals an and enterprising nature.

Planetary influences in year 2009
She is currently under the influence of Sun-Mercury period. Mercury is the Lord of 6th and 9th houses of her chart and placed in the 10th house. Actually Mercury as the Lord of 9th house(house of luck) in the 10th house should have given her positive results, but on the contrary, she continuously failed to make any impression in international tennis tournaments including Bejing Olympics. The reason is the placement of retrograde Mercury in the Taurus Navmansa. Taurus is the 8th house from natal Mercury hence the Mercury is in Astamansa gave unfavorable results. Adding to this, transiting Rahu is moving in the Ascendant squaring natal Sun and Moon and the Ascendant Lord Saturn is moving in the 8th house.

She has Virgo Ascendant in solar return chart for year 2009. Muntha is placed in the 3rd house and Munthes Mars is in its own sign but combust. Strong Jupiter and Venus may provide support so she might start recovering from problems that she has had to deal with in the year 2008. She will realize normal health conditions. But, the Solar eclipse of 26th January 2009 will fall in her Ascendant and may restrict her and she may have to face fitness problems yet again. So it would be better for her to be fully recovered from the injury. Any negligence can aggravate her fitness related problems, particularly, till May 2009. Month of February looks better and she might perform well when Mars and Venus are in exaltation in Transit. Talks and gossips regarding her perceived romantic relationships may keep the media busy in the first quarter of the year 2009.

She will be under the influence of Ketu Bhukti till 1st September 2009 and Ketu is placed in the 9th house in Leo Navmansa. Leo falls in the 8th house of her chart. So Ketu is in Nidhanamasa. So irritants are likely to rattle her and this period indicates a need or help of medication. She will require to maintain her diet in this phase and should also avoid over-excretion between July and September. The best way to deal with this period is to make a proper schedule and maintain that routine to avoid injury. She may not be able to get much success in that phase. She may even think about taking a break from professional tennis between May and September 2009. In the Month of October the Venus-Saturn conjunction may help her recover and her career may start gaining momentum from mid November 2009.

So for Sania it would be a year of starting all over again.