Who Will Win Today, Sweden Or Switzerland, In 55th FIFA 2018 Match 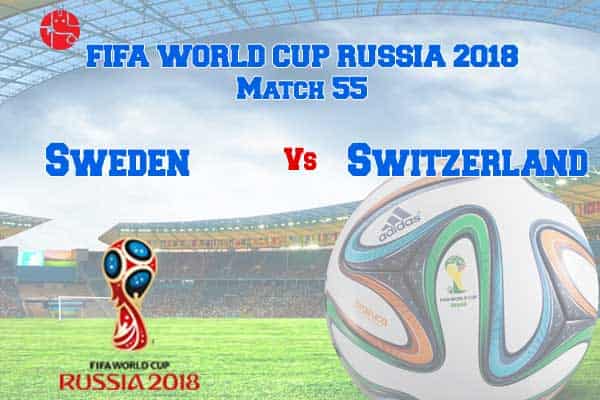 A couple of teams have already been qualified for the quarter-finals of the FIFA World Cup 2018 and some are yet to be. This match is an interesting one as both these teams have never faced each other in a World Cup match before. These two teams have played against each other 28 times but not in a World Cup. In those previous games, Switzerland has won 11 times whereas Sweden won 10 times and a total of 7 draws were seen. Thus, this is a very enthralling encounter between the two teams who have done really well till now in their matches.

Sweden VS Switzerland Match Prediction: About The Top Players’ Performance

Sweden has been playing really well and the players are also in good form to receive such kind of pressure in a match like this. With the likes of Mikael Lustig, Andreas Granqvist, Ludwig Augustinsson, Pontus Jansson, Sebastian Larsson, Albin Ekdal, Jimmy Durmaz, Gustav Svensson, Marcus Berg and John Guidetti. On the other hand, Switzerland has players like Mario Gavranovic, Breel Embolo, Xherdan Shaqiri, Gelson Fernandes, Blerim Dzemaili, Valon Behrami, Stephan Lichtsteiner and Michael Lang in the squad who may also help in forming a good game for Switzerland. There are some players who have already been suspended and some who have a risk of suspension if shown any more yellow cards in the game.

Who Will Win, Sweden or Switzerland: Know It From Ganesha

As per today’s match prediction using astrology, it is foreseen that Sweden will win this match against Switzerland to secure the place for the quarter-finals in this football World Cup 2018 in Russia. Even though this will be a great match to watch, like the other Top 16 matches and Switzerland will give its best shot to get through, Sweden will eventually win this match and continue their journey in this FIFA World Cup 2018.