Stressful time for Marion Jones in 2009 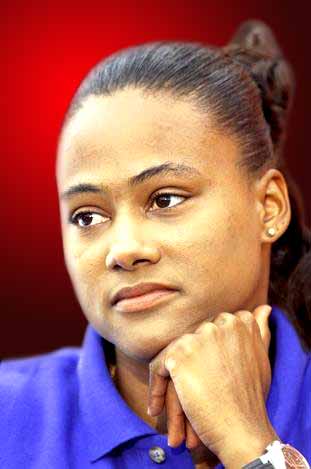 The former Olympic track gold medallist Marion Jones was sentenced to six months in prison for lying to investigators about using performance-enhancing drugs and her role in a check-fraud scam. If sources are to be believed, then this six-month jail sentence handed to Marion Jones might become the greatest lesson for drugs taking in sports. Ganesha finds out what the destiny has in store for her.

Astro analysis of the event

She is currently in dire stress and the suffering had begun with her Saturn return while transiting Saturn was in Leo as per Sayana system. And currently the transiting retrograde Saturn is moving closely over the natal Venus- the planet of glory, which has tarnished her public image terribly. The public opinion is also very hard on her. In her solar return chart, the Ascendant Lord Moon is debilitated indicating extreme mental stress, agony and emotional setbacks. Debilitated Mars placed in the Ascendant is causing enormous problems. More importantly, Sun-the significator of ruling class and government authority is debilitated and hemmed in between malefic planets clearly indicating problems and confrontation with government authority. Presence of Malefic planets in the 12th house from Sun is the indicator of Bandhana or imprisonment. In this chart, four planets are in debilitation indicative of depression and failure in life. Her progressed Sun is approaching natal Rahu signifying legal issues. Such planetary influences bring disgrace, scandal and isolation.

It is really ironical that a young woman who was regarded as the fastest woman in the world had to face such a humiliation. Unfortunately, it doesn’t seem to be the end of her pain. The transiting Saturn and Rahu may continue to bother her in next two years. Particularly, the last quarter of the year 2009 seems extremely stressful, disappointing and depressing for her.

May Lord Ganesha bless her!