Warne shall connect well with the Americans, but his spin-show may be under a cloud! 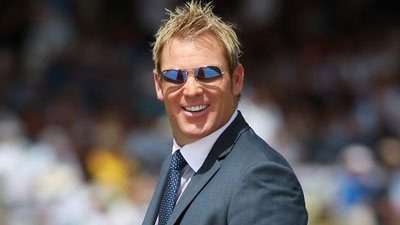 In an effort to popularise cricket in the US, several icons of the game, including master blaster Sachin Tendulkar and spin wizard Shane Warne, will play T20 matches in that country in November. More than two dozen of the world’s most famous cricket players will play matches at three big-league baseball stadiums at Citi Field on November 7, Minute Maid Park in Houston on November 11, and Los Angeles’s Dodger Stadium on November 14. What do the stars indicate about Shane Warne – the crafty master of spin? Find out the answers in the article…

[Owing to the unavailability of credible birth-time of the Warne, the analysis and predictions have been done on the basis of the Solar Chart/ Surya Kundli with the help of his birth-date and birth-place only.]

1. Will the legendary bowling wizard Warne, be able to popularize cricket in the US through this effort?

Travelling in store…
There is a lot of travelling indicated, so Warne may be all around the park in the upcoming months!

Taking Decisions…
The influence of the auspicious Jupiter on his Sun, Ketu and Mars, Saturn and Rahu will act greatly in his favour as this shall ensure a lot of will power and determination and he shall take more decisions in a bold manner.

The Spin Wizard and his Craft…
Ganesha foresees that Warne may not be able to spin the ball in the same magical manner as he used to do earlier, as the transit of Rahu over the Natal Jupiter, Mercury and Moon may somewhat put his imagination and skill under a cloud. He may not be able to maintain the same grip over the batsmen and may be given to conceding many runs.

Fame Abroad…
Jupiter shall ensure he remains in the limelight and also success in foreign countries!

Shane Warne – the Promoter?
He shall do well as a proponent of the sport of cricket throughout his life and even in this tournament or series in the US, he shall connect well with the cricket enthusiasts.

Ganesha wishes good luck and a bright future ahead to Shane Warne.