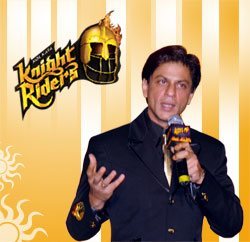 Created by Board of Control for Cricket in India and sanctioned by International Cricket Council, Indian Premier League is to kick start its first Twenty20 tournament from April 18, 2008. The tournament will definitely prove a cricketing extravaganza for Indian spectators as some of the renowned celebrities of Bollywood and business world have bidden for franchise. One of the eight teams of IPL is Kolkata Knight Riders, whose franchisee is Shah Rukh Khan, the Bollywood Badshah and ruler of Hindi silver screen. Ganesha would like to predict what will King Khan gain from this tournament, how will Saurav Ganguly perform and who will be the key performers of Kolkata Knight Riders?

Shah Rukh Khan is born in Leo Ascendant and Mars is placed in the 4th house in Scorpio and becomes Atmakaraka so he has always been a sports lover. He is currently running Saturn-Saturn-Saturn Phase and Saturn in 7th house represents masses or public. The transiting Jupiter is moving in the 5th house of performance over the natal Venus, the planet of fame and glory. IPL will commence on 18th of April when Sun, the Lord of Ascendant will be exalted. Venus the 10th Lord will also be exalted. So there is no doubt that the King Khan will gain name and fame from his new venture. He is passing through a progressive phase of his life where he may try many things connected to masses and we all know Cricket is not just a game but religion for Indians.

Captain of Kolkata Knight Riders Saurav Ganguli is currently experiencing a Jupiter-Mercury-Venus period and from 9th May he will be under the influence of Jupiter-Mercury-Sun phase. Sun is exalted in the Navmansa chart and placed well as a Lord of Ascendant. So both the key figures of KKR are looking in great shape.

Looking at the charts of other members of the team Ganesha feels that Brendon McCullum, Ishant Sharma, Chris Gayle and David Hussey may play prominent role during this IPL first season for Kolkata Knight Riders. Ganesha also feels that KKR can reach the Semi Finals of IPL. But SRK’s team may face tough challenges from Mumbai Indians, Deccan Chargers, Chennai Super Kings and Delhi Daredevils. They will surely play like Royal Bengal Tiger and try hard to unleash the power and tear down the rivals.

As per Ganesha’s calculations, following will be the key players for Kolkata Knight Riders.