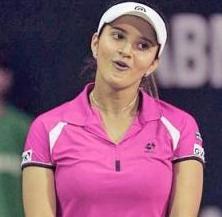 Sania Mirza, whose short skirt has created much hullabaloo among conservative Indians, has made to the finals of the 2007 Bank of the West Classic. The ace Indian tennis star has defeated Akiko Morigami, Tatiana Golovin, Patty Schnyder and Sybille Bammer and claimed the doubles title with partner Shahar Peer, beating Anna Chakvetadze and Victoria Azarenka 6-4 7-6. With the grace of Ganesha, predictions on the future of Sania came correct. Earlier it was predicted that period of Sun-Jupiter would further improve her ratings between February and July 2007. It was also predicted on GaneshaSpeaks that she would find herself very energetic during the period and might win some important matches and she would be honored during that phase. She is currently under the influence of Sun-Saturn period. Sun is debilitated but placed with Venus in the 10th house so debilitation gets cancelled and it forms Neechabhanga Rajyoga. In fact, it is the Sun period that has made her career reach such heights. And as she is now under the sub period of Saturn, she may make tremendous progress because Saturn gets remarkable strength as an Ascendant Lord by exchange with Mars. Middle Sept 07 to April 2008 is going to be a very strong period for her due to Mars in Gemini. We wish her all the luck and may Lord Ganesha bless her. Ganesha's Grace, Tanmay K. Thakar