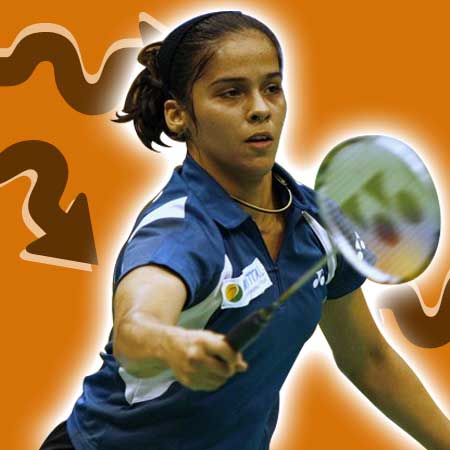 Introduction: Saina Nehwal, the 18-year-old Hyderabadi, became the first Indian woman shuttler to enter the semi-final of Super Series event in Singapore Open in June and then made it to the quarter-final of Thailand Open. Her performance caught the nation's imagination when she knocked out world No.5 Chen Wang of Hong Kong in Olympics. After warding off a stiff challenge from Li Ya Lydia of Malaysia in Taiwan she won the Chinese Taipei Grand Prix Gold Open badminton tournament which made India proud of her. Surya Kundli

Saina has Saturn Atmakaraka and Karakamsa becomes Sagittarius. Saturn is Vargottama. Amk Venus is placed with strong BK Mars and forms a Jaimini Rajayoga. Karakamsa becomes Sagittarius and Saturn is placed with Jupiter in the Karakamsa forms an extraordinary Rajayoga. Mars is exalted and if we apply Karakamsa in Navmansa chart strong Mars is placed in the 5th house. Powerful Mars is always a boon for any sport-person. It makes her aggressive, determined and gives the strength to stand against odds. It denotes the capacity to conquer the rivals. This is a fitting picture of someone who is successful in her/his field at a young age. There are three planets in Capricorn sign in her chart including Mars and Rahu. The strong Capricorn influence makes her resourceful, determined, methodical, tough, stubborn and persistent. In fact, it gives the practical ability allied with the drive of ambition to make her successful. Mercury and Jupiter are in exchange so she plans her game carefully without meanness and is able to achieve great results. Because of her organizing abilities she is able to work on several aspects of her game simultaneously. She became the first Indian woman to reach the quarter finals at the Olympics (Beijing) when she upset world number five of Hong Kong. Saina Nehwal became the first-ever Indian woman shuttler to win two Grand Prix singles titles when she won the $1,70,000 Yonex Chinese Taipei Grand Prix Gold badminton championship in Taiwan on Sunday. Currently, the transiting Jupiter is moving over the natal Saturn opposing natal Jupiter and Mars, Venus, Mercury trine the natal Mars and Venus helped her to achieve the milestone. She has great potential and she is likely to achieve greetere heights in year 2009 particularly between February and July 2009. Ganesha's Grace, Tanmay K.Thakar The GaneshaSpeaks Team