Roger Federer to head towards Retirement 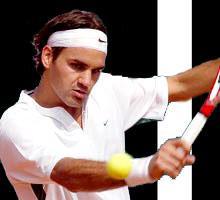 World’s no.1 tennis player, Roger Federer is regarded as the best player of his generation. He has won twelve Grand Slam Singles titles, four Tennis Masters Cup titles and fourteen ATP Masters Series titles. He was however defeated by Djokovic in the Australian Open Tennis of 2008. Ganesha studies his birth chart with his microscopic eyes and foresees his retirement from the game in near future.

Current Planetary influences
I have mentioned in my earlier article that Federer’s progress may begin to slow down from mid Jan 2008. He has just completed Saturn Dasha and in his chart Saturn becomes the Lord of 6th house (house of competition), which is very important for a sports person. Saturn-Jupiter conjunction has lifted his career immensely and he reached the peak of his career. But now he is under the influence of Mercury Mahadasha and Mercury Bhukti. Mercury is placed in the 12th house with Rahu indicating setbacks in career.

Future predictions
Wimbledon is always played in late June/early July, while the Sun is in Gemini. This is Federer’s 11th house, where the Sun gets 4 Astkavarga points. So, he has always done well in Wimbledon but this time picture is very different. He will be passing through the Mercury-Mercury-Ketu period during Wimbledon 2008. Ketu is placed in the 6th house of competitions and rivals. The transiting Ketu would be moving in the 12th house over the natal Sun. Considering all these aspects, his chances of becoming a Wimbledon champion again look very slim. He might not perform as per expectations. Chances of injuries are also very high. So, there are all possibilities that the world might find a new Wimbledon champion this year. He may continue to play till June 2010 but he is surely heading towards retirement.