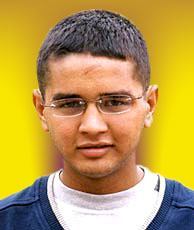 Parthiv Patel, the Indian Cricketer and former member of the Indian National Cricket Team, is a left-handed batsman who started playing for his school in 1996. He was selected for Gujarat in 1998. He made his Test Debut in 2002 in the second test against England, thus becoming the youngest wicket- keeper in Test history. Though he suddenly disappeared from the national cricket, he is again in news for his marriage with childhood sweetheart Avni Patel. Ganesha studies his chart and predicts his future in his career as well as his personal life.

Astrological Analysis of chart
Wicketkeeper-batsman Parthiv Patel was born on 9th March 1985 in Ahmedabad, India with Aquarius Ascendant. Sun is placed in Ascendant. Conjunction of Yogkarka planet i.e. Venus and Mercury is placed in 2nd house of finance, which is giving strength to his horoscope. Moon is placed in 8th house. Saturn is placed in 10th house of career and Jupiter is placed in 12th house.

Career
Ganesha feels that in Parthiv’s chart, transiting Jupiter is passing through 11th house of gain and is in trine aspect with lord of the 10th house of career i.e. Mars, which indicates that he is likely to play for India during 2008. Parthiv Patel was bought by India Cement’s Chennai Super Kings team for $325,000 during IPL (Indian Premier League) Player Auctions.

Marriage
The Gujarat cricket team captain Parthiv Ajay Patel has been caught and the googly was not bowled by a bowler but by a 22-year-old- his childhood friend Avni Patel, an interior designer from Ahmedabad.

Parthiv Patel is getting married on 9th March 2008, which is also his 23rd birthday. Ganesha notes that in Parthiv’s chart, transiting Jupiter is passing through 11th house and is aspecting 7th house of marriage, which indicates that for marriage prospects 2008 would be favourable. In his chart, lord of the 7th house of marriage i.e. Sun is placed in Taurus sign in Navamsha chart so that the bride-to-be is as old as Parthiv and is an interior designer, but as transiting Ketu and transiting Saturn are passing through 7th house, this may create some complication.