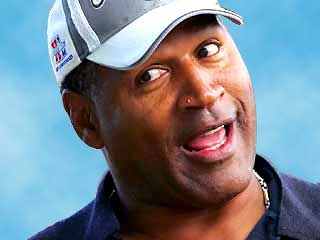 Introduction: The robbery trial of the former US football star, OJ Simpson, has opened in Las Vegas. He faces 12 charges including kidnap, armed robbery and assault with a deadly weapon. Mr Simpson, 61, who denies the charges, was acquitted of murder of Nicole Brown Simpson and her friend Ronald Goldman in 1995. In September 2007, Simpson faced more legal troubles, as he was arrested and charged with first-degree kidnapping with use of a deadly weapon. In the light of this Ganesha predicts the outcome of the trial.

O. J. Simpson has Ascendant in Leo and Aries rising in the Navmansa with Mars placed therein. This gives O.J., as he is popularly known, handsome looks and confident persona. Moon in Pisces and in Cancer Navmansa likes subtlety and imagination, romance and denotes artistic or musical talent but also makes him an emotionally driven and moody man. He has Venus placed in the Ardhra ruled by Rahu and also hemmed in between malefic planets which makes him a flirt with the ladies and often experiences disillusionment or deception where relationships are concerned. He has Mercury Vargottama which makes him a successful diplomat. He has Mars placed with Rahu in the 10th house and Mars is in Aries Navmansa. The strong Mars has contributed significantly in his career as NFL Player.

Simpson was acquitted of the murder of Nicole Brown Simpson and her friend Ronald Goldman in 1995. In September 2007, Simpson faced more legal troubles, as he was arrested and charged with first-degree Kidnapping with the use of a deadly weapon. He has Moon placed in the 8th house in watery sign and also in watery Navmansa which is indicative of emotion driven behavior Mars-Rahu conjunction shows his aggressive and violent manner. On September 15, 2007 when he was arrested he was under the influence of Venus-Mercury-Mercury period. Mercury is retrograde and placed in the 12th house with 6th house Lord in his chart. The transiting Saturn-Ketu in Leo squaring natal Mars and Rahu placed in the 10th house is indicating confrontation with the authority and also legal harassment.

He is currently under the influence of Venus-Mercury-Sun period and Sun is hemmed in between malefic planets. The transiting Rahu is moving in the 8th house from natal Sun. So the period till April 2009 looks extremely stressful for him. He will have to be very careful till 5th November 2008. The transiting Jupiter may act as a safeguard for him but he might not come out unscratched in this case. He might not get jailed for life but he is liable to face some financial penalty or short term jail in this case.