Who Will Win, Mexico Vs Sweden, In 41st FIFA World Cup Match 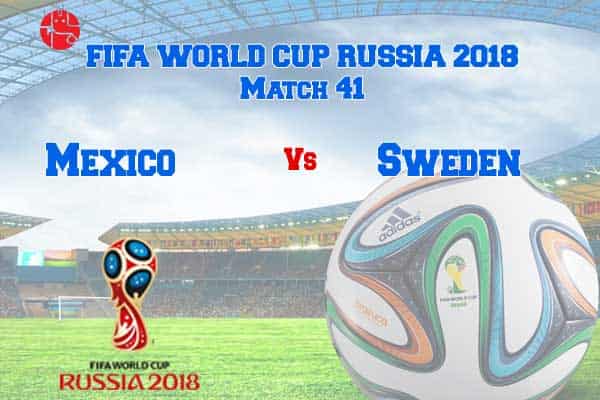 FIFA World Cup 2018 is in full swing and yet another important game is going to be played in Russia on 27th June. This upcoming Mexico Vs Sweden match is very significant for both the teams as its going to decide who will qualify for the next round. After the last minute defeat which Sweden faced against Germany, it is now crucial for both the teams to win this match and get into the top 16 of the tournament. Even if Sweden drew with Mexico, and if Germany won their match against Korea, Sweden may not be able to qualify for the next round. From Mexico’s point of view, if they drew or won against Sweden they will qualify and they would surely aim to win this game to be on top of the table by winning this very last game as well. Read on to know Ganesha’s predictions:

Mexico Vs Sweden Match Prediction: About The Top Players’ Performance

Mexico is in great form and shape with players like Rafael Marquez, Hector Moreno, Miguel Layun, Andres Guardado and Javier Hernandez. Hirving Lozano and Carlos Vesta are the players who have scored well in the previous games and are likely to influence this match as well. On the other hand, players like Andreas Granqvist, Ola Toivonen, Albin Ekdal, Jimmy Durmaz, Marcus Berg and Gustav Svensson are some players who can have a positive impact on this match and turn the tide in favour of Sweden.

Who Will Win Today, Mexico or Sweden? Know It From Ganesha

It is not about who is a better team, but it is about who plays better. As per the astrological match prediction, it is predicted that Mexico will either win the match or the match will end in a draw. In both the cases, Mexico is going through to the top 16 which means that Sweden may lose its chance to go further in the next round of the FIFA World Cup 2018.