Stars will favour Jwala Gutta till Jan 2016, but she will have to be careful after that, feels Ganesha 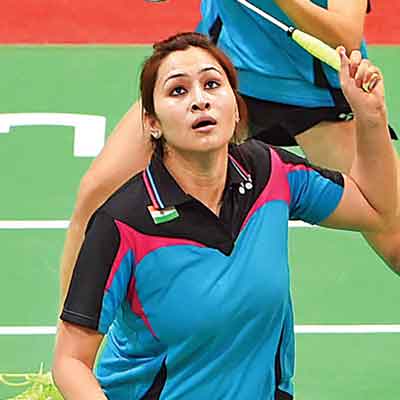 The left-handed shuttler from Hyderabad, Jwala Gutta is the country’s most successful doubles player, and has been representing India in international badminton for more than 15 years. Partnering Shruti Kurien, Gutta won the National Championship six years in a row. She later split with Kurien and paired up with Ashwini Ponnappa, with whom she tasted greater international success, reaching as high as No.10 in the BWF World Rankings in 2015. Apart from a bronze medal in the BWF World Championships in 2011, she won a gold and silver at the 2010 and 2014 Commonwealth Games respectively in women’s doubles which were the first for the country in the discipline. The ace shuttler has unfortunately been embroiled in many controversies, such as splitting with her husband Chetan Anand, himself a top men’s shuttler, as tales stringed on the grapevine said, because of her involvement with disgraced cricketer Mohammed Azharuddin, which both have denied.

Ganesha takes a peek at her future prospects.

Astrological Predictions:
Jwala Gutta was born with Swagruhi Sun in conjunction with retrograde Venus. This combination is squared by Rahu, Ketu and Jupiter.

Mars, the planet of vigour and vitality, is debilitated in her Chart. Mercury the primary significator of tennis and badminton as a game – is exalted and retrograde in her Chart. Saturn is also exalted.

Thus, born with two exalted planets, one debilitated planet and one Swagruhi planet, Jwala is going to remain in the limelight. Rahu square Sun is to blame for the controversies that she has been surrounded with.

Jupiter’s transit over her Natal Venus and Sun till January 2016 is going to remain favourable for her, so till then she stands a good chance to remain under the spotlight, and positively. However, once transiting Rahu and Jupiter conjunct in Leo on 30th January 2016, her tough time would start because it will be squared by Saturn transiting over her Natal Jupiter and Ketu. Post January 2016, Jwala is going to face problems in her personal and professional life. She will again be vulnerable to controversies. She will have to take good care of her health and vitality too.

Jwala may also face some legal issues if she is not careful after January 2016.

In a nutshell, Ganesha feels that till the end of January 2016, her time will be good but after that, luck is not going to support her much, so her fame may also decrease and she may also be defamed if not careful.